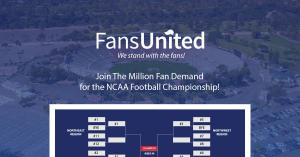 The current playoff format with just four teams is far too narrow and much too subjective to produce a true champion. The fans demand more! We propose a mini-version of March Madness with 12 teams.”
— Patrick J Healy, CEO and Founder FansUnited.org

CHEVY CHASE, MARYLAND, USA, November 29, 2017 /EINPresswire.com/ — “For far too long the passionate desires of the fans have taken a back seat to the financial interests of the NCAA’s bowl format.” says Patrick Healy, CEO of FansUnited.org. “Through the power of social media, we seek to do the unthinkable – cause the entrenched establishment (the NCAA) to place the fans interests ahead of their own.”

In a series of emails and social media posts to the Top 25 NCAA Division I schools, FansUnited.org has enlisted the support of the student bodies and alumni who have seen their long quest for the football equivalent of March Madness fall upon deaf ears.

FansUnited.org believes that they can gather one million electronic signatures and encourages students, alumni and other fans of the respective schools to click the following link to cast their vote for what they term “the Million Fan Demand!”. https://www.fansunited.org/Vote/NCAA-Football-Championship

In short, the proposed tournament format calls for a twelve-team tournament with the Top Four Ranked teams receiving a bye in week one. Over the course of the following three weekends, the teams will compete in a single elimination tournament that parallels basketball’s “March Madness”.

For those who are more than just NCAA Football Fans, please click www.FansUnited.org to cast your vote for other controversial sports policy matters to include:

• a “Fans Bill of Rights”,
• an “Evaluation of Roger Goodell’s Performance as Commissioner” and
• the highly controversial “Kneel Gate”.

We are America’s first online democracy!