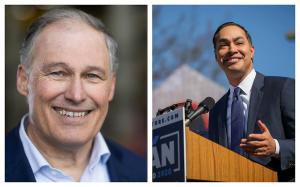 WASHINGTON, DC, USA, August 8, 2019 /EINPresswire.com/ — Presidential candidates Bernie Sanders and Julian Castro are scheduled to speak at the Islamic Society of North America (ISNA)’s convention in Houston on August 31. ISNA has been designated a Muslim Brotherhood entity by the US Justice Department.

Meanwhile in Detroit on July 30, the Governor of Washington State and presidential candidate, Governor Jay Inslee, chose to meet with the leaders of the Council on American Islamic Relations (CAIR), an Islamist group the United Arab Emirates has designated a terrorist organization, and one a US court designated an unindicted co-conspirator in the nation’s largest terror financing trial.

Dawud Walid, executive director of the Michigan chapter of the Council on American-Islamic Relations (CAIR-MI) hosted the Trump-bashing event in Detroit.

In his opening remarks, Governor Inslee declared that American Muslims were “under attack from the current occupant of the White House.”

“Governor Inslee thinks he is supporting American Muslims, but he is actually supporting Islamists,” said AMCD co-chair Tom Harb. “CAIR was originally founded as a front group for the Palestinian terrorist organization, Hamas, which itself is an arm of the global Muslim Brotherhood. The Brotherhood seeks to overthrow any government which stands in the way of instituting Islamic law as the supreme law of the land.”

Mr. Walid asked Governor Inslee whether he supports the right of Americans to participate in the “boycott, divestment, sanctions” (BDS) movement against Israel. Inslee replied that while he did not agree with everything that BDS stands for, he supports freedom of speech, even for those with whom he disagrees, and that he generally supports Israel.
“It sounds to me like Governor Inslee would allow those who seek the destruction of Israel to push their agenda unimpeded,” said AMCD co-chair, John Hajjar. “As Senator Lindsey Graham said, the BDS bill proposed by Representative Ilhan Omar would ‘destroy Israel.’ This is not what the majority of American Middle Easterners want. They want to advance peace and stability in the Middle East, not to destroy the one democratic state in the region. At the heart of the BDS movement is antisemitism and Governor Inslee did not push back on that at all.”

Inslee put the blame for increased tension with Iran squarely on President Trump and indicated that the US should reverse Trump’s policies by re-entering the Iran deal and removing sanctions.

“It is unbelievable to me,” said AMCD co-chair, Iranian-American and Washington State resident, Hossein Khorram, “that Governor Inslee would seriously propose returning to the failed policy of appeasing the Mullahs. Appeasement is an utterly failed policy. Giving the Mullahs billions of dollars under Obama only emboldened the theocrats and allowed them to spread violence and mayhem throughout the region. Iran currently supports terrorism from the Shi’a militias in Iraq and Syria, to Hezbollah in Lebanon, to the Houthis in Yemen, to the Taliban in Afghanistan. By returning to the failed policy of the past, Governor Inslee would make it possible for them to support still more terror. This is not a policy most Iranian-Americans support.”

The American Mideast Coalition for Democracy believes Governor Inslee should stick to his pet issue of climate change and candidates Sanders and Castro should stay away from foreign policy, especially while attempting to pander to Islamists.