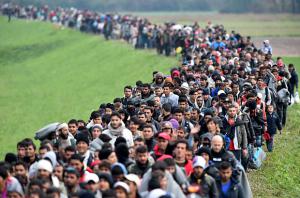 There is Irrefutable Proof That Immigrants Are More Than Our Brothers and Sisters.

A simple understanding of the laws of existence reveals there is absolutely no difference between immigrant and non-immigrant people.

Vast Self Corporation, a public charity, announced today development of a video which demonstrates that as far as the laws of existence are concerned, there is absolutely no difference between immigrant and non-immigrant people. In fact, each exists without own-being/own-existence; thus, they are the same seamless universal-being. A video comprised of a recognizable concoction of images, texts, graphics, and Q&A is designed to provide an effortless and effective platform for anyone to recognize this overlooked fact of nature.

A spokesperson says, "the surprising fact is that this is not something new, but a proof first introduced over 1900 years ago by Nagarjuna. He was a man of profound scientific insight into the laws of existence. Second of all, we know from experience that our senses should not always be trusted.  Take a discovery made by Copernicus in 1543 as an example.  Up until 1500s humans believed the Sun was revolving around the Earth because this is how it appeared to them. Copernicus proved all humanity wrong with science and common sense.  As revolutionary and shocking his discovery was, it's nothing compared to the inaccuracy of our current perception of immigrants and ourselves".

This video reveals the inaccuracy of our senses, and here is a brief sample of how this will happen.

If an immigrant, whom we perceive as another person, really existed as a different being than us, they would have to possess their own-being/own-existence. By the same token, we must also have our own-being.

What does it mean to have your own-existence? It means to be a singular entity, possessing your own inner nature capable of establishing yourself in your own right without causes.  Otherwise, you cannot claim to have your own-being/own-existence. Currently, our perception tells us that immigrants have their own-existence/own-being because we see them as separate and not part of our being. Thus, we assume this is how we all exist.

However, when examined, the opposite is true. Every immigrant and non-immigrant exists because of something else. No one comes from no-where and no one can produce their own-being.  A person is not a singular entity because countless parts make up a person. No part of a person exists as a single entity. Each part is actually a composite of a right, left, bottom and top sub-part, which are composed of more right, left, top and bottom parts. The dependency on these parts never ends. Even atoms and quarks exist without own-being.  Each particle is fused together collectively by innumerable causes and conditions synchronized by the conscious environment/the whole of nature. Thus, despite common belief, no one is a singular entity or possesses an individual core nature that could produce them. Therefore, no one has their own-being/own-self.

Since no one is a singular entity, and everything that produced the countless parts of a person could not establish themselves by their own core nature, there is no difference between us. There are no two single-person entities with their own-being/own self.  All humanity actually exists as a one-seamless-vast living organism with our bodies and consciousness produced by our whole conscious environment/nature.  There really is no distinction between nature and people.  We can say something is a person or is nature, but in reality, they are all just one vast entity – life.

Why are our senses lying to us?

It's because we are not aware that our perceptions are inaccurate with how things exist; thus, we hold on to a false belief that every person and thing has their own-being/own-existence/own-self.  As shown here, this belief is baseless and contradictory to how everything exists.

It has been over 500 years since Copernicus pointed to the inaccuracy of our perceptions, so isn't it time we make another leap forward? Isn't it time everyone recognizes this falsehood in our perception? The truth is that the only difference between us both are labels like "immigrants" and "us". The names we give each other were created as a simple convenience, a social convention and nothing more. They were not meant to symbolize the truth of every person or their existence.

To conclude: to perceive an immigrant as a separate entity/self is incorrect because it is impossible for us to exist as our own-being. So, next time we see an immigrant south of the border or in the middle of the Mediterranean Sea, we must remember that our senses are fooling us. We must remember the individuals we've named "immigrant" are our same self as and are as equally precious because they are us.

A Vast Self spokesperson says, "This is the law of existence. This is how everyone exists already; no one can exist in any different way. We have to notice the biggest discrepancy. People appear to have own-being, but they don't exist as own-beings. When we become more and more familiar with the laws of existence, eventually, our senses will stop tricking us. We'll perceive immigrants and ourselves as we truly exist. This corrected perception will reflect sameness, then the duality and illusion of people having their own-being will vanish forever. Then, we will recognize that everyone we've labeled "immigrant" has always been more than a brother or sister. They were always us.

Vast Self Corp. has launched a campaign on crowdrise.com to raise funds to finalize this video and to promote free distribution of it.

About Vast Self Corporation:
Vast Self is a 501(c)(3) non-profit whose sole purpose is to restore peace and happiness in the World. This is accomplished by demonstrating how all personal and World problems can be eliminated permanently by recognizing the single reason responsible for their existence. We aim to provide educational tools that will serve all individuals, and organizations seeking permanent solutions to personal and World problems.