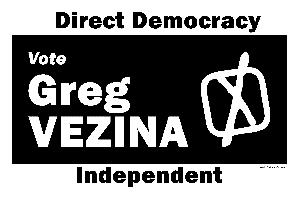 Superior Court warns City of Mississauga in ruling at 7:10 pm Friday, October 11, 2019 it will issue injunction against debates excluding any candidates.

To be sure, if the City were to organize candidates' debates… and decide to invite certain candidates to participate, while excluding others… I would not hesitate in granting… injunctive relief.”
— Ontario Superior Court Justice James Stribopoulos

MISSISSAUGA, ONTARIO, CANADA, October 13, 2019 /EINPresswire.com/ — Ontario Superior Court Justice James Stribopolous says it is unconstitutional to keep smaller party and Independent candidates out of debates on public property, he would grant an injunction against it, and candidates left off such debates would be entitled to sue for damages.

The Court advised the City of Mississauga it would grant an injunction to stop any candidate debates held on City property happening in Mississauga in the remainder of the 2019 federal election.

The ruling Friday, October 11, 2019 at 7:10 in the evening came four hours after the hearing for a two-part injunction application brought by self-represented Mississauga Centre riding Independent candidate Greg Vezina against the City of Mississauga regarding candidate debates and the removal of his campaign signs.

Neither of the Injunctions sought were granted after the City's solicitor assured the Court the City would not allow any debates on public property for the remainder of the Federal Election and not enforce its election sign bylaw in ways that violated Vezina's constitutional rights. The Court strongly cautioned the City it would face legal consequences for doing so including damages. The Court decided "in the circumstances, given the public interests at stake" not to award costs.

The City of Mississauga and its May 22, 2018 Ontario Provincial Election debate moderator Mayor Bonnie Crombie now face legal proceedings from the 11 smaller party or independent candidates for all six Mississauga ridings excluded from the City's Mississauga Matters Debate at City Hall Council Chambers.

Mississauga had tried to do the same thing again in the 2019 Federal Election but the September 23, 2019 Mississauga Matters Federal election debate was cancelled after the 24 candidates from the four major parties in the six Mississauga electoral districts that were invited declined to take part. None of the 12 other officially nominated new and smaller party or Independent candidates were invited.

Elections Canada, the Chief Electoral Officer and the Commissioner of Canada Elections had refused to clarify an unnecessary 2015 policy change used by debate organizers and the major political parties, their leaders and candidates, and partisans at other levels of government, as in this case, to suppress legitimate candidates and deny the public the right to an informed vote.

After corporate, union and third party donations were prohibited in 2004, the 2008 Elections Canada's official policy was that debate expenses did not have to be considered as a contribution of a good or service and campaign expense, as does all advertising that promotes or opposes a party, leader or candidate, so long as "all candidates" were invited. In 2015 they changed the official policy to as long as "two or more candidates" were invited.

The Chief Electoral Officer and Elections Canada replied to complaints and the threat of a legal proceeding about this change being interpreted as allowing the exclusion of candidates saying to multiple complaints during the current election with "As previously stated, debates between candidates or political party leaders are not regulated by the Canada Elections Act (either at the national or electoral district level)".

On September 25, 2015 they replied to a final demand for clarification with "We note that nothing in this interpretation note authorizes or forbids the exclusion of candidates or party leaders from public debates. Rather, the interpretation note clarifies how the Act’s provisions on reporting expenses and non-monetary contributions apply to debates involving at least two candidates".

As a result of this historic decision Vezina says "He and several other Independent candidates are launching an immediate Charter challenge against this change which is used to circumvent the prohibition against corporate, union and third party contributions of debates and their expenses with a value of many thousands of dollars, well above the $1,600 maximum for personal donations".

A ruling that parties and candidates accepted illegal contributions or had expenses exceeding the spending limits that have an impact on the election in any riding could result in elected MPs losing their seats in Parliament.

The Province of Ontario's NOTA Party has challenged the same change in Ontario where the exception for debate expenses was written into their election law and Ontario"s Chief Electoral Officer likewise refused to clarify it only applied to the accounting section of their Elections Act. In that Judicial review during the 2018 election the Court refused to intervene and referred the matter to trial.

Vezina founded the None of the Above Direct Democracy Party of Ontario in the 2014 election with eight candidates in 107 ridings or 7.5 percent. Four years later in the 2018 election they increased the number to 42 in 124 ridings or 30 percent of ridings, growing faster than the Greens or Libertarians. In both 2014 and 2018 they nominated candidates in five of the six Mississauga area ridings.

The NOTA party campaigns on the 3Rs of Direct Democracy – Referendum, Recall and Real electoral and legislative Reforms that give voters control of politicians and parties. Candidates are accountable to their constituents and there are no central party policies or controls of elected MPs beyond the binding Direct Democracy principles. The joint Ontario and Federal NOTA Party website is https://nota.ca

The NOTA Party registered with Elections Canada on September 11, 2-019 the day the election called but it was too late for the party name to be on the ballot, unlike in Ontario where registration is allowed until the close of nominations. The Party had five candidates nominated as Independents including Vezina.