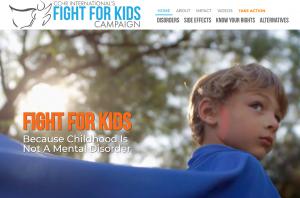 CCHR International says the drugs are being prescribed like candy, despite many of them scheduled by the Drug Enforcement Administration as high risk for abuse and addiction.

CCHR’s mission is to eradicate abuses committed under the guise of mental health and enact patient and consumer protections.

Our ‘Fight For Kids: Childhood is Not a Mental Disorder’ campaign is aimed at protecting children and families, including providing free information.”
— Frederick Shaw, a spokesperson for CCHR International

CLEARWATER, FLORIDA, UNITED STATES, November 12, 2019 /EINPresswire.com/ — The innovative website resource for parents faced with children labeled with a “mental” or “learning disorder,” provides them with facts about adverse effects of treatments being recommended to minors. Recognizing that parents and other caregivers often have to sift through considerable misinformation about mental health treatment to get facts about potential risks, the “Fight for Kids” (FFK) website, produced by the mental health watchdog Citizens Commission on Human Rights International (CCHR), has streamlined this, providing a definitive resource that cuts to the chase when it comes to drug and other treatment damaging effects.

The FFK site is aimed at helping parents and caregivers access information to be able to make educated choices about a child’s healthcare needs—a “Know Your Rights” and Informed Consent platform that includes:

• How the disorders children are labeled with differ from medical diagnoses and practices;
• The psychotropic drugs most recommended and their side effects, some of which are highly addictive, leading to drug dependence;
• Statistics on psychiatric drug use;
• Legislation or legal safeguards that parents need to know in order to protect their children from forced psychiatric or psychological treatment; and
• The dangers of electroshock treatment that can be administered to children when the drugs “fail,” even to those aged five and younger, and why it should be banned.

Frederick Shaw, a spokesperson for CCHR International and former Los Angeles County Sheriff Deputy, who organized the Sheriff’s Youth Athletic League, says the site is also a resource for policy makers, educators and pediatricians and other family doctors concerned about the fact that in the millions of children and adolescents are recklessly prescribed potentially injurious psychotropic drugs.

FFK cites statistics from IQvia, a healthcare data source, revealing the breakdown of the 7,213,599 kids 0-17 year olds in the U.S. on psychiatric drugs:

CCHR International says the drugs are being prescribed like candy, despite many of them scheduled by the Drug Enforcement Administration as high risk for abuse and addiction. The group says the FFK website is necessary because few parents know that psychiatric drugs are not like general medicine prescribed to treat physical diseases. There are no physical tests to confirm a psychiatric diagnosis which is based largely upon non-medical opinions about behavior.

Parents are not fully informed of drug risks, nor advised of non-harmful, medical and educational alternatives to address problems of attention, mood and behavior that won’t damage the developing brains and bodies of their children, CCHR says.

“Our ‘Fight For Kids: Childhood is Not a Mental Disorder’ campaign is aimed at protecting children and families, including providing free information through our website fightforkids.org,” Shaw added.

CCHR urges readers to support its Fight For Kids campaign. CCHR International has helped to obtain many of the laws cited on the website. You will be helping parents get the facts, know their rights, and most importantly, protect their children from harm, while also helping effect societal change in how we treat our children. Click here to donate.

About CCHR: Initially established by the Church of Scientology and renowned psychiatrist Dr. Thomas Szasz in 1969, CCHR’s mission is to eradicate abuses committed under the guise of mental health and enact patient and consumer protections. L. Ron Hubbard, founder of Scientology, first brought psychiatric imprisonment to wide public notice: “Thousands and thousands are seized without process of law, every week, over the ‘free world’ tortured, castrated, killed. All in the name of ‘mental health,’” he wrote in March 1969. For more information visit www.cchrflorida.org or call 727-442-8820.

Fight For Kids—Because Childhood is Not a Mental Disorder