Involuntary examinations are being initiated on children without parental knowledge. The parent finds out AFTER their child has been Baker Acted.

The Florida chapter of CCHR is a non-profit mental health watchdog dedicated to the protection of children. 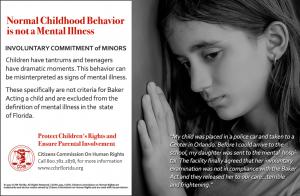 Normal Childhood Behavior is not a Mental Illness

CCHR is asking lawmakers to change how the mental health law is applied to children to protect them from traumatic involuntary psychiatric examinations.

The manner in which the Baker Act is being initiated, especially when dealing with children, is a gross violation of human rights.”
— Diane Stein, President CCHR Florida

CLEARWATER, FLORIDA, UNITED STATES, November 19, 2019 /EINPresswire.com/ — The mental health law in Florida, commonly called a Baker Act, allows for a person of any age to be taken into custody and transported to a psychiatric facility for examination. During 2018 there were over 200,000 Baker Acts with more than 36,000 of them initiated on children. Some of these children are very young, including those between the ages of 2 and 5 years old. [1]

According to the Baker Act Reporting Center, involuntary examinations more than doubled in the past 17 years prompting the Florida chapter of the Citizens Commission on Human Rights (CCHR) to call for amendments to existing state law to protect children from abuse. CCHR is concerned over the large number of individuals being sent annually for involuntary psychiatric examinations in light of the fact that it is known that a percentage of these Baker Acts are illegal due to a failure to meet the criteria for taking a person into custody.

In order to take a person into custody under a Baker Act there are three criteria that must be legally met yet it is common knowledge that this is not always done and it was disclosed during a meeting of the Baker Act Task Force in 2017 that 30 percent of the Baker Acts initiated on children in Pinellas County did not meet the criteria. This alarming fact is one reason CCHR believes the Baker Act needs to be reformed so that parents and guardians are brought into the process before a child is put through the trauma of a Baker Act in an effort to reduce illegal Baker Acting of minors. [2]

In the example of minors, parents and legal guardians are being left out of the process only finding out that their child has been Baker Acted after initiation and usually after the child has been transported by law enforcement to a psychiatric facility. CCHR believes that this is a rights violation, a belief that is shared by Sheriffs, Police Chiefs and even School Districts across Florida.

Over the past several years, CCHR has worked to educate those granted the power to initiate a Baker Act on a child on why a parent or guardian should be brought into the process before initiation resulting in county and city level policy changes that requires parents to be contacted prior to initiating a Baker Act.

However, greater protection of children is needed according to CCHR who is calling for lawmakers to change how the mental health law is applied to children and teens to help prevent unjust involuntary psychiatric examinations.

Those interested in learning more about CCHR’s campaign to protect children from abusive Baker Acting are encouraged to call 800-782-2878.

About CCHR: Initially established by the Church of Scientology and renowned psychiatrist Dr. Thomas Szasz in 1969, CCHR’s mission is to eradicate abuses committed under the guise of mental health and enact patient and consumer protections. L. Ron Hubbard, founder of Scientology, first brought psychiatric imprisonment to wide public notice: “Thousands and thousands are seized without process of law, every week, over the ‘free world’ tortured, castrated, killed. All in the name of ‘mental health,’” he wrote in March 1969. For more information visit www.cchrflorida.org

CCHR Florida: Who Speaks for the Child?