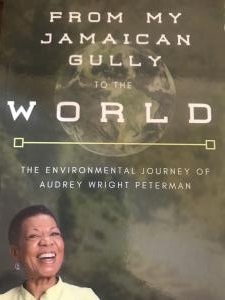 Book Cover of “From My Jamaican Gully to the World”

Audrey Peterman, a force of nature conservationist, tells her life story from Jamaica to America in “From My Jamaican Gully.”

Beginning with her love for a childhood sense of place and the magical stream behind her birth home in Jamaica to the discovery and wonder of the natural beauty of America.”
— Charles Cinque Fulwood

From Jamaica to America: A Valentine’s Day Black American Love Story
“From My Jamaican Gully to the World”

Audrey Peterman, a force of nature conservationist and eloquent witness for America’s National Parks, tells her life story from Jamaica to America in “From My Jamaican Gully.” Beginning with her love for a childhood sense of place and the magical stream behind her birth home to the discovery and wonder of the natural beauty of America, Mrs. Peterman has also slipped tender notes from the love story of her courtship and marriage to her husband, Frank, into a book of environmental awe and adventure. “From My Jamaican Gully to the World” is available on www.Amazon.com and www.Lulu.com

“From My Jamaican Gully and the World” is a story of childhood wonder and grown-up discovery of adventure in love and nature. Mrs. Peterman traces her passion for the beauty of natural places and the environment back to her gully in Jamaica where she spent countless hours playing with friends, watching the janga fish and bobbing for mangoes floating downstream.

A gregarious and eloquent speaker and writer, Mrs. Peterman writes that when she met her husband, she imagined she was gazing on “a black version of James Bond.” “I was immediately smitten,” she said, “and fortunately, it was mutual.” But reluctant to cross the line of friendship in case things turned sour, the two became default dates for each other over the next seven years as she tried to fix him up with her most beautiful and eligible girlfriends.

But finally yielding to the power of attraction, the Petermans “jumped over the broom” and were married. Getting married in America after a whirlwind courtship, the couple took a long journey and drove 12,500 miles from their home near the Atlantic in Fort Lauderdale to the Pacific Ocean off Washington State. They were stunned to discover the expanses of sublime beauty protected for Americans’ enjoyment in the National Parks and forests. From Acadia National Park in Maine to the Grand Canyon; from the Badlands to the geyser-fields of Yellowstone; from the giant sequoias of Yosemite to the Hoh Rainforest on the Pacific Coast, the couple fell passionately in love with the country’s natural beauty.

Mrs. Peterman writes in “Gully” that observing less than a handful of Black and brown Americans among thousands of visitors and employees in America’s national parks, they resolved to find out why and do something about it. For 25 years, they have tirelessly worked to make the national parks better known, loved and supported by all Americans.

The Petermans’ efforts came full circle in January 2017 when President Obama issued a Memorandum directing managers of the national parks and forests to do more to engage Americans of color, since they found most of the history of African Americans in these treasured places.

“It’s incredible to say but seeing so much beauty over the years has made us even more devoted to each other and the world’s pristine places as we head to our 28th wedding anniversary. Happy Valentine’s Day!”