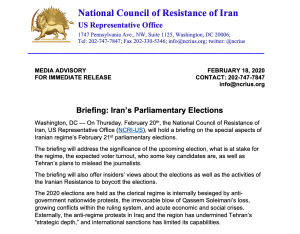 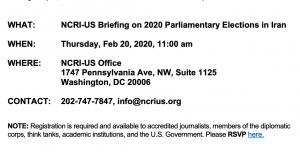 The briefing will address the significance of the upcoming election, what is at stake for the regime, expected voter turnout, and who some key candidates are.

The briefing will address the significance of the upcoming election, what is at stake for the regime, the expected voter turnout, who some key candidates are, as well as Tehran’s plans to mislead the journalists.

The briefing will also offer insiders’ views about the elections as well as the activities of the Iranian Resistance to boycott the elections.

The 2020 elections are held as the clerical regime is internally besieged by anti-government nationwide protests, the irrevocable blow of Qassem Soleimani’s loss, growing conflicts within the ruling system, and acute economic and social crises. Externally, the anti-regime protests in Iraq and the region has undermined Tehran’s “strategic depth,” and international sanctions has limited its capabilities.

WHAT: NCRI-US Briefing on 2020 Parliamentary Elections in Iran