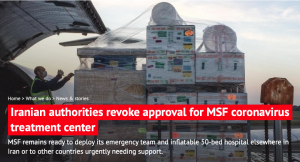 Mullahs are looking for cash to fund their malign activities and terrorism. Further financial aid to this regime will be used against the people of Iran, global peace and health.”
— Dr. Majid Sadeghpour

WASHINGTON, DC, USA, March 26, 2020 /EINPresswire.com/ — On March 22, the renowned international non-governmental group, Medecins Sans Frontieres (MSF) or Doctors Without Borders sent a consignment of medical aid to Iran, including one field inflatable hospital, medicines, respiratory masks, and protective clothing. Recognizing how bad Iran has been hit with COVID-19, MSF also sent a 50-bed inflatable hospital and a 9-person emergency team to Isfahan which is the second most affected province in Iran. Within hours, the Islamic Revolutionary Guard Corps (IRGC), designated as a terrorist organization by the United States, acted on the order of Iran’s Supreme leader and called for halting of such a vital mission to help critically ill patients in Iran.
Organization of Iranian American Communities (OIAC), condemns Iran’s move in refusing the aid and onsite support from MSF. The world community must hold the Supreme Leader, Ali Khamenei, Iran’s President, Hassan Rouhani accountable for their crimes against the people of Iran and the global health. For the record, Iran holds the highest number of coronavirus in the world. According to data collected by the National Council of Resistance of Iran, to date, there have been more than 10,500 deaths across 219 cities and towns in Iran.

While the death toll rises in Iran, the regime rejects US humanitarian aid, expels MSF and misappropriated some $1 billion in international aid intended to help ordinary citizens in recent days. Lack of transparency, accountability, supporting the needs of the affected population and refusal to employ best practices such as quarantining hard-hit areas are not just a threat to the people of Iran but the global health.

The sinister regime of Mullahs is working hard to reshape the narratives on the COVID-19 pandemic and portrays as a biological attack that is exacerbated with sanctions. For the record:

1. With the continued hiding of the truth on the COVID-19 death toll in Iran, the international community is operating with missing critical data to combat this global pandemic. For the sake of global health, the United Nations, must hold Iran accountable for lack of transparency and condemn its continued efforts to hide the truth. Examination of mass graves across Iran in recent weeks demonstrates the depth of the tragedy in Iran.
2. The disinformation campaign led by Ali Khamenei, Hassan Rouhani, IRGC, and Javad Zarif is deliberate, purposeful, and shortsighted in order to shift the blame to others. The world community must be diligent and use the example of halting MSF vital mission as a lens to examine the regime’s intentions. Mullahs are looking for cash to fund their malign activities and terrorism. Further financial aid to this regime will be used against the people of Iran, global peace and health.
3. For the sake of Iranian people, the World Health Organization and all relevant international bodies must step in to ensure medical aid is reaching the health professionals and the patients in this time of crisis.
4. For the sake of combating terrorism and preventing further info-terrorism on the COVID-19 pandemic in Iran, the United States should add Iran’s Ministry of Intelligence and Security (MOIS) and all its related lobbying entities to the Foreign Terrorist Organizations list.