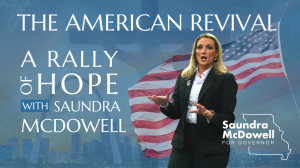 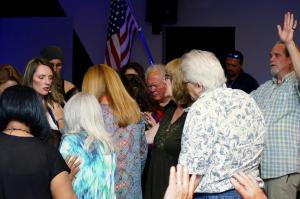 Saundra McDowell praying with a group of voters 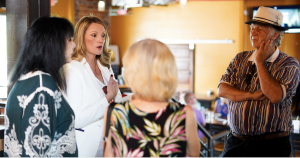 I believe we can embark on a new age of reform in this state, one that will make government again responsive to people, that will revitalize the values of God, Family, and Country.”
— Saundra McDowell

In an announcement made online early this week, McDowell stated: “Starting on June 26th, I will be taking my message across Missouri, holding rallies, meeting with you the people, and sharing my vision for our great state.”

McDowell, a Christian, Conservative, Republican, ran for state auditor in 2018, securing over 1 million votes in the general election. She served in the Air Force, worked as a lawyer, and is a mother of five.

The McDowell for Governor campaign has so far announced 7 rallies leading up to the August 4th Primary election, with as many as 20 more planned:

Little is known about the ‘American Revival’ theme, but in an interview with local St Charles media last week, candidate McDowell gave some clues:

“Many Missourians today, feel burdened, stifled, and sometimes even oppressed by government that has grown too large, too bureaucratic, too wasteful, too unresponsive, too uncaring about people and their problems. They seek a vision of a better Missouri, a vision of society that frees the energies and ingenuity of our people while it extends compassion to the lonely, the desperate, and the forgotten.

I believe we can embark on a new age of reform in this state, an era of renewal. An era that will reorder the relationship between citizen and government, that will make government again responsive to people, that will revitalize the values of God, Family, and Country.”

The rallies will be open to the general public, and are expected to draw large crowds. Local authorities in O’Fallon are yet to comment on whether a police presence will be required in light of George Floyd protests.

Those interested in attending the rallies can find out more at: https://www.facebook.com/McDowellforGovernor