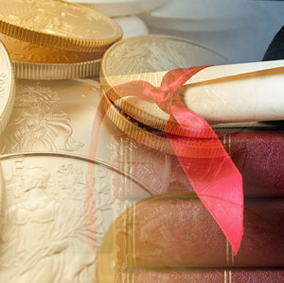 CHARLOTTE, NORTH CAROLINA, USA, June 30, 2020 /EINPresswire.com/ — A national precious-metals dealer has teamed up with a sound money policy group to help students pay for the ever-increasing costs of college.

Money Metals Exchange has joined with the Sound Money Defense League to offer the Sound Money Scholarship — the first gold-backed scholarship of the modern era. Starting in 2016, these organizations have set aside 100 ounces of physical gold (worth about $180,000 based on current Gold price) to reward outstanding students who display a thorough understanding of economics, monetary policy, and sound money.

The Sound Money Scholarship is open to high school seniors, undergraduate, and graduate students with an interest in economics, specifically the free-market tradition. Applicants do not have to be economics majors to be eligible to receive this scholarship – and the deadline for applications is September 30.

Dr. Will Anderson is a Fellow of the Mises Institute and professor of economics at Frostburg State University. He earned his MA in economics from Clemson University and his PhD in economics from Auburn University, where he was a Mises Research Fellow. He has been writing about Austrian economics since 1981. In 1982, he won the Olive W. Garvey Economic Essay Contest and presented his paper at the Mont Pelerin Society in the former West Berlin.

He has published numerous articles and papers on economics and political economy, including articles in The Independent Review, Reason Magazine, The Free Market, The Freeman, Public Choice, The American Journal of Economics and Sociology, Quarterly Journal of Austrian Economics, The Journal of Markets and Morality, Regulation, Freedom Daily and others

Dr. Per Bylund, PhD, is a Fellow of the Mises Institute and Assistant Professor of Entrepreneurship & Records-Johnston Professor of Free Enterprise in the School of Entrepreneurship in the Spears School of Business at Oklahoma State University, and an Associate Fellow of the Ratio Institute in Stockholm. He has previously held positions at Baylor University and the University of Missouri.

Larry Reed is the Foundation for Economic Education’s (FEE) President Emeritus and Humphreys Family Senior Fellow. Reed served as president of FEE from 2008-2019 after serving previously as chairman of its board of trustees in the 1990s and both writing and speaking for FEE since the late 1970s. Prior to becoming FEE’s president, he served for 21 years as president of the Mackinac Center for Public Policy in Midland, Michigan. He also taught economics full-time from 1977 to 1984 at Northwood University in Michigan and chaired its department of economics from 1982 to 1984.

He holds a B.A. in economics from Grove City College (1975) and an M.A. degree in history from Slippery Rock State University (1978), both in Pennsylvania. He holds two honorary doctorates, one from Central Michigan University (public administration, 1993) and Northwood University (laws, 2008).

Michael Maharrey serves as the national communications director for the Tenth Amendment Center. He hosts his own podcast, Thoughts from Maharrey Head, as well as the Friday Gold Wrap. Michael is the author of four books and several e-books on the US Constitution and nullification.

Michael earned a degree in Mass Communications from the University of South Florida St. Petersburg and a B.S. in Accounting from the University of Kentucky. He speaks at events across the United States, and frequently appears as a guest on local, national, and international radio shows advancing constitutional history and America’s founding principles.

The deadline to submit applications is September 30, 2020.