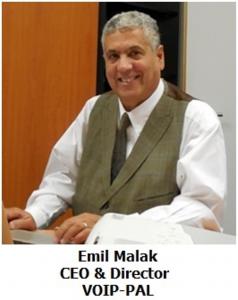 WACO, TEXAS, US, August 5, 2020 /EINPresswire.com/ — CEOCFO Magazine, an independent investment publication that highlights important technologies and companies, today announced it has published an op-ed (https://www.ceocfointerviews.com/voippaloped10080420.html) by Voip-Pal CEO Emil Malak. Voip-Pal.com Inc., Voip-Pal (OTCQB: VPLM), a Bellevue, Washington based company is an inventor and pioneer of the switching technology now being used by many of the world's largest telecommunication and social networking companies, without which they could not connect Landline phone calls to Internet phone calls.

Mr. Malak has other business ventures and is well versed in global politics and culture. In his op-ed, Malak covered a variety of topics including why the coming November election is about Marxism, not the coronavirus. He warns how the United States of America could see a transformation similar to what has taken place in many Third-World countries, “The American voter needs to be properly informed of the consequences of following failed socialist states like Cuba and Venezuela. If that sounds far-fetched, remember that before the arrival of Hugo Chavez, Venezuela was the wealthiest country in South America, sitting on the largest proven oil reserve in the world with an estimated 300 billion barrels.” Mr. Malak continues “Policies like restricting political speech, making housing a right, the green new deal, elimination of gun owner rights, cutting police funding, Medicare for all, reparations for slavery, and letting China and Iran have their way with the U.S. are just a few of the radical planks in the party platform. Never before in American political history have socialist policies been so mainstream as they are today.”

Mr. Malak addressed several timely topics including the current civil unrest and violence that has been plaguing cities across the United States over the past few months, and was critical of Democrat leaders that refuse to denounce the rioters. “Along with Portland, other cities like Seattle, Oakland, New York City, Washington DC, Chicago, and Richmond have experienced riots, physical assaults on innocent civilians and law enforcement officers, destruction of statues and monuments, vandalism, fires, and attacks on federal buildings, police precincts, and courthouses. Anarchist mobs are wreaking havoc and chaos as they terrorize these communities. All the while, Democrat leaders including their presidential nominee Joe Biden refer to them as “peaceful protestors.” Despite the billions of dollars in damage because of the senseless destruction, the loss of life, and the obliteration of countless businesses.”

Another topic Malak tackled in the article was regarding the need to make major changes to improve the current US tax code with the implementation of a fair, across the board consumption tax. Malak laid out his case for the flat tax suggesting it would be a winning platform for President Trump’s re-election campaign. “Study after study has shown that a flat tax system would greatly increase tax revenue and lessen the burden on taxpayers. Individuals would keep more of their own money, millions more jobs would be created, and the economy would expand even further. The coronavirus will take second or third place in people’s minds if there is the promise of fair tax reform, and the President will cruise to victory. The majority of hardworking voters have one main voting priority, the money in their pockets; everything else takes second place.”

As he has done in several articles over the past few months, Mr. Malak again provided excellent insights on the COVID-19 pandemic. Malak explains that with COVID-19 continuing to mutate, states must avoid making the same mistake made in New York state, “Some experts believe a recovered COVID-19 patient could become defenseless against the new COVID-19-2.0. Unfortunately, the new strain is believed to have come to the United States from Italy and Europe via New York City. New York’s Governor Cuomo did not restrict or advise against travel out of his state and allowed the new strain to spread rampantly.”

Mr. Malak continued, “In all likelihood, COVID-19 will only get worse between now and election day. The Administration should come out and deal with that reality head on with the American people. The American people know the virus is not Trump’s doing, but that of the Chinese regime, as the President has correctly called COVID-19, the “China Virus.”

On how we must learn to live with the coronavirus, Mr. Malak stressed, “Daily we live with such illnesses as coronary artery disease, lower respiratory infections, chronic obstructive pulmonary disease, lung cancer, breast cancer, other cancers, diabetes, and the list goes on. We have no choice but to accept the fact that we must deal with the coronavirus as we do with other serious medical issues. We have to adapt until a reliable therapeutic solution is developed, since any hope for a vaccine is out of the question. The economy must remain open. Just like we do not shut down the economy because we are having too many strokes or heart attacks, we cannot shut down because of this virus.”