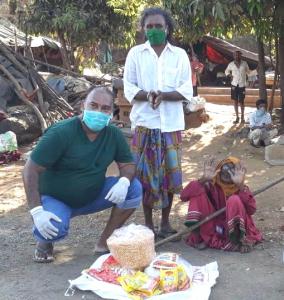 Mauris Noronha providing food in the slums of Mumbai India

Mauris was applying for the Form I-551 Visa but policy changes during Covid19, made him change his dreams

LAS VEGAS, NEVADA, UNITED STATES OF AMERICA, September 11, 2020 /EINPresswire.com/ — Covid began in December 2019. The US didn’t act. India didn’t act. In fact most countries didn’t need to. It was a domestic issue in China. But within 3 months in February 2020, the world was already seeing the social and economic impact.

In Mumbai India, a local hero already popular for his regular philanthropic deeds, was taking notice. Mauris Noronha, was receiving request for aid, when the local auto rickshaw drivers and housemaids were getting jobless as educated citizens started practising social distancing in this dense city of 20 million.

Mauris had just applied with a Law firm in Vegas, California to process his immigration to the United States. He had also made reservations for an upcoming visit to Las Vegas where he planned to open his Financial Consulting office. By 1st March, Mauris started sharing small amounts of money each day so that those asking for help could get themselves one meal for the day. On 25th March India’s PM Narendra Modi announced a Lockdown. Even before that, Mauris had bought over 500 pounds of food and laid it out in the residential complex for any residents to pick for free, just so no one need venture out with the fear of contracting Covid19.

So what has President Trump got to do with all this?
Well, the lockdown was for 15 days. Initially, Mauris’s plan was to donate a little money and get the area’s poor and needy pass over the difficult period of uncertainty. The same uncertainty that he faced as his lawyers back here in Vegas were telling him that the immigration process is on hold. Since Covid was now the Nation’s only focus. Even the hotel reservations and the conventions he planned to attend were all getting cancelled each passing day. As the virus caused a health fear it equally caused an economic crisis in the US and worldwide. The writing was on the wall.

Before the White House could announce the halting of non-immigrant work visas on June 22nd, Mauris got a whiff of what was coming and that was all that was needed for a charitable man to do a charitable deed. He decided to spend all the money he had saved for his immigration, towards the needy in the city. For the local poor penniless migrant labor who needed to walk back 100 miles to their small towns and villages. For the police personnel on the streets, the ambulance drivers facing risks, the local intercity bus drivers, teachers and even lawyers. But mainly, the tens of thousands of slum dwellers, in the slums all across the city.

As Trump intended to stop foreign workers snagging American jobs, the country most affected was India. Estimates are about 30,000 skilled workers face a direct threat due to this change, says Rickson Rodricks from Skillincome.com

But Mauris has no regrets. He was applying for the Form I-551 Visa and says that he will reapply later. However, during this time he has been able to provide food, masks, gloves, sanitizers and more to over 1 million people in and around the city of Mumbai, without taking a dollar in donations from anyone. When asked why? He says, he is inspired by Mother Teresa and could not sleep at night seeing the plight of the poor who had no immediate help from anywhere. With the government providing approximately $14 a month, it was impossible for someone to run a home of 5 using that money while still being unemployed. Worse still most migrant labor did not have access to this money as they were not from the city.

The stats are astounding. Alone, he has spent over 150 days in this cause. Some days, there were queues of 8000 people on the streets, requiring crowd control by the police and volunteers. For perspective, Trump got the highest crowds at any rally ever, right there in India, at over 100,000 spectators

Mauris has personally delivered food packets to over 100,000 people and through delivery volunteers has been able to feed over 1 million people through the city and state of Maharashtra. He has been honored by City Mayor of Mira Bhayandar and several other civil, religious and social organizations.

Trump’s policies are good for the country. It may hurt those outside the United States. But is that always true? In this case, thirty thousand affected tech workers will suffer temporarily. But a million needy benefited, indirectly from Trump. It’s as clear as the smiles on the faces of those who were served. You can view them here: https://www.facebook.com/maurisbhai666