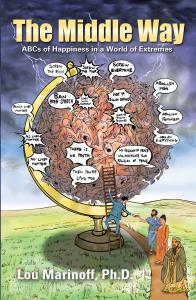 The Middle Way: ABCs of Happiness in a World of Extremes

How the conservative virtue ethics of Aristotle, Buddha, Confucius can restore happiness, social harmony & political stability in a world of divisive extremes.

Lou Marinoff’s The Middle Way: ABCs of Happiness in a World of Extremes is a clarion and profoundly relevant revisiting of the ideas first introduced in the original best-selling edition of this title (2007). Only nowadays the extremes it excoriates have reached a fevered pitch. The Middle Way is a razor-sharp condemnation of the toxic identity politics and totalitarian political correctness that have poisoned Western cultures, hand-in-glove with the Islamicization of the European Union by militant jihadists. It is also a meticulously researched, compelling argued exposé of corrupted Western institutions and their Marxist ideologues who view “the kaleidoscopic spectrum of humanity solely through the restrictive lenses of race, class, and gender.” The Middle Way is both a timely book and a book desperately needed in these polarizing times.

After introducing the ABCs and extolling their conservative virtues, Marinoff takes to task political extremism from the radical Left that is tearing America and the West apart. He goes on to contrast the "sacred" extremisms of unchallengeable theocracy with the "profane" extremisms of godless Marxism. He shows how human evolution favored the emergence and dispersion of mutually hostile tribes, who must now commingle and cooperate in a globalized world. He details how the Left's relentless politicization of sex difference has waged wars against patriarchy, men, boys, and the nuclear family—eroding Western populations from within, by demographic attrition. He contrasts the appalling lack of basic education in the developing world with cultural Marxism's lowering of an "Ivy Curtain" over Western higher education, exposing how their "People's Democratic Universities" have replaced mind-expanding liberal arts with mind-numbing political indoctrination.

Marinoff also rings alarm bells over increasing economic extremes, with ever-more of the world's wealth concentrated in ever-fewer hands. The accompanying impoverishment of the middle classes only empowers extremists. He critiques "totemic" extremes of "McFoods" and "McDrugs," and their impositions of noxious global brands on herds of ill-informed consumers. He confronts head-on the extremes of the Middle East, including the Arab world's demonization of Israel, their repeated attempts to annihilate the Jewish State, and their hijacking of history itself to lay blame on Western civilization for their own self-inflicted grievances. Finally, he tackles terrorist extremes and the plague of Islamic terrorism that has swept the planet. Marinoff shows how the ABCs can help resolve even this most extreme manifestation of extremism: radicals who value suicidal death and murder more than precious life itself.
Drawing extensively on the wisdom of Aristotle, Buddha, and Confucius, The Middle Way never wavers in its spirited and erudite defense of Western civilization, and celebration of all humanity in our best light. Marinoff draws an effective moral map to navigate the pitfalls of extremism, helping us to optimize individual happiness, social harmony, and political stability.

“Lou Marinoff has done a great service to humanity by providing us with The Middle Way in our efforts to address the conceptual crises of the world. He is versatile beyond imagination, provocative, and very entertaining.”
— Sundeep Waslekar, President, Strategic Foresight Group, Mumbai

"This book lays the foundation for an ideological shift in human systems and societies … a vaccine against the current postmodernist and deconstructionist paradigms that have poisoned Western culture.”
— Gabriel Arnaiz, editor of Pensar bien para vivir mejor, Seville

"In a world increasingly polarized, seemingly continually on the brink of disaster, this read offers guidance and flickers of hope for those of us feeling powerless and just plain scared."
–Cordelia Strube, playwright and author, Toronto

Lou Marinoff is a Professor of Philosophy and Asian Studies at The City College of New York. He authored Plato Not Prozac (HarperCollins, NY 1999), the internationally bestselling "bible" of the philosophical counseling movement, translated into twenty-five languages. Subsequent bestsellers include Therapy for the Sane, The Power of Dao, The Inner Philosopher, and The Middle Way.
Lou is the founding President of the American Philosophical Practitioners Association (APPA, 1999). APPA trains philosophers as counselors and consultants, across the US and worldwide. He is a leading pioneer of this burgeoning industry; whose mission is to help individuals and organizations flourish by applying constructive philosophy to their everyday lives.
Lou became a published poet in his teens, recorded an album of original songs at twenty-two, and is an accomplished classical guitarist. In addition to popular philosophy books, Lou has authored dozens of invited book chapters, scholarly articles, occasional pieces, and — under the pen-name Lou Tafler — literary fiction. He is also a table hockey champion, having won both the Canadian Open and the US Open titles.

Order the book on Amazon.com