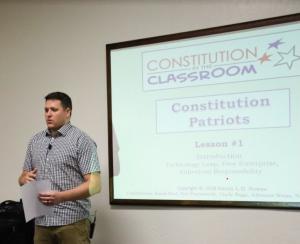 Entrepreneur and local business owner Harrison Rogers educates voters before the election in November 2020, by providing a Constitution study course.

MESA, ARIZ, USA, October 14, 2020 /EINPresswire.com/ — Many voters make decisions to elect a party without comprehensive knowledge about the Constitution or what drives the fabric of American politics. Last week local business owner Harrison Rogers hosted the first of a series of Constitution study classes aiming to educate voters about social issues before the upcoming November elections.

Rogers' goal with this course is to discuss what the U.S. Constitution has to say about some current social topics that have been plaguing the minds of voters. The course's first lesson taught by a NCCS instructor, gave an intro into U.S. history and discussed the U.S. Constitution and its influence.

"Entrepreneurship, owning a business, and all the "success we see on Instagram" is obviously popular,” said Harrison Rogers, owner, and founder of HJR Global. “The irony is that our constitution, the thing that allowed all these popular things to happen, seems to have become "unpopular."

Through sponsoring this informational course and allowing attendees to attend for free, Rogers hopes to break the stigma to the term “Constitutionalist” which is often used in a derogatory manner to refer to someone who is “old school” or “anti-progress.” Instead, he wants to make people realize that this term empowers people to believe in being able to progress in many areas and issues, but without failing like all the societies before America's constitution was created.

Other topics that Rogers plans to tackle with this course include:

Filling the Supreme Court seat: The recent passing of U.S. Supreme Court Justice Ruth Bader Ginsberg has spurred speculations to whether President Donald Trump will fill her seat as his term draws to a close. Do history and the Constitution support bringing his nominee to the Senate’s vote, this fractious election year?

Defunding the police: The deaths of George Floyd and Breonna Taylor have forced a reckoning on issues of police brutality and racial inequalities within the U.S. Defunding the police is mistakenly perceived by many voters as abolishing law enforcement. Rather, it means reallocating the funds away from the police department towards other non-policing forms of public safety and community support. But will this approach be effective in controlling crime?

Importance of the House and Senate: While the public elects both House Representatives and Senators, and the passing of legislation requires the agreement of both, what are the differences between these two bodies of the Congress, and how do they impact the decisions made for the public?

Socialism versus communism: Despite the differences in these two economic and political theories, the two terms are often used interchangeably and are considered a taboo in American politics. However, with the primary election success for members of the Democratic Socialists of America (DSA) like Senator Bernie Sanders, Representative Alexandria Ocasio-Cortez, and Senator Julia Salazar, is Democratic Socialism now a viable platform against the private ownership and free market that drives capitalism?

About Harrison Rogers and HJR Global

Harrison Rogers is the founder and owner of HJR Global, a rapidly growing innovative venture capital firm based in Mesa, Arizona. HJR Global comprises multiple industries and organizations and has appeared on the Inc. 5000 List for four consecutive years. HJR Global’s primary goal is to buy into distressed companies and help them become profitable again. It also aims to provide educational resources to business owners and entrepreneurs.

Rogers is a self-made millionaire who started his entrepreneurial journey by establishing a carpet-cleaning business at the age of 17. He believes being a businessman takes “leadership, courage, reliability, trustworthiness, and ambition,” and he's passionate about transforming ideas into lucrative ventures. Lexington Life Academy is one such venture. It's an innovative educational institution inspired by the struggles Rogers' autistic sister experienced, and it serves as a critical resource for children with autism and adults to help develop the skills to manage life on their own. Rogers' and HJR Global’s other business ventures include Factum Financial, a financial consultancy providing advice about solidifying assets; and LCI Realty, a full-service commercial real estate and property management brokerage.

Harrison Rogers is also the accomplished author of the book "Falling Forward: The Secrets To Successful Leadership" and has been voted the “Most Influential in Valley Business” for two consecutive years. He's also been voted Arizona Republic’s 35 under 35 and Phoenix Magazine’s 40 under 40, and he's an experienced investor and business coach.
Rogers recently announced his plans to run in the 2022 gubernatorial election. Running in the Republican primary, Rogers will join other potential candidates including Ben Quayle, Karen Taylor Robson, and David Schweikert. Learn more here and follow us @HJRGlobal.

About the National Center for Constitutional Studies (NCCS)

The NCCS was formed in 1971, with the goal to restore the notion of the U.S. Constitution following the intents of America’s founders. Originally called The Freeman Institute, this organization has published books (including The 5000 Year Leap and The Making of America), study materials, and other educational resources to educate the public on correct Constitutional principles. Their nationwide seminars, which range from evening meetings to all-day events, discuss America’s Great Success Formula and the contribution of the Founding Fathers towards the creation of the first free nation in modern times. The NCCS also publishes and distributes pocket Constitutions to encourage patriotism among Americans.