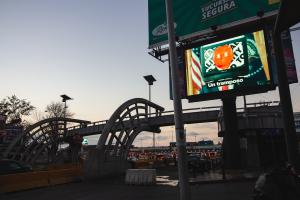 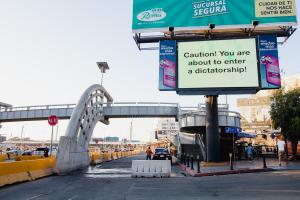 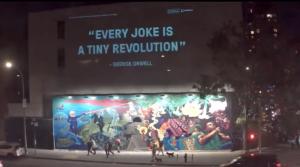 Race To The End + Walltime Projection in the Bowery, New York City

"Race To The End" launches an anti-Trump art installation on massive digital billboards at the U.S. and Mexico border crossing and the Bowery, New York City

Every joke is a tiny revolution”
— George Orwell

LOS ANGELES, CALIFORNIA, UNITED STATES, October 27, 2020 /EINPresswire.com/ — The End Collective announce the launch of "Race To The End", a 50+ artist group show of anti-Trump works. The project is broadcasted non-stop simultaneously on multiple streaming sites (Twitch, YouTube, etc) and is currently live on giant digital billboards displayed as you enter the U.S. from the Mexican Border and is projected daily on a massive wall in the Bowery, New York City.

From October 20 – November 20, The End Collective is broadcasting anti-Trump statements from world renowned artists on key large scale digital billboards at the San Ysidro – Tijuana border (one of the busiest borders in the world) as a direct signal to the Trump administration that we are eager for his reign of terror to end. This phase of the project is in direct partnership with a Tijuana and CDMX based design studio who have worked directly with The End Collective to produce and animate on the project. Both groups share a disgust for Trump’s ongoing racist attacks on Mexico and believe that the people of Mexico deserve better than to be slandered by a man who has failed as a businessman, a President, a husband, a father and at life.

Messaging Displayed on the Signs in English and Spanish

– "Caution! You are about to enter a dictatorship!"
– "Welcome to stolen land"
– "Everyone wears orange in prison"

Newsweek Mexico is among the 30+ news sources that have provided coverage of the Border displays so far.
Photos and videos of the San Ysidro and Otay takeover can be provided upon request.

From October 22 – November 3rd, The End Collective will project a special broadcast of anti-Trump artworks in the Bowery, New York City. The projection is part of a partnership with Walltime, an app that enables anyone to share their creative videos via a massive public projection on a busy thoroughfare. Through Walltime users can listen to synched audio from the anti-Trump video in real time while watching the projection. The End Collective is excited to partner with Walltime which has been used to show videos by The Lincoln Project, BLM-relevant content, as well as material honoring COVID19 victims and first line health workers.

And many, many more

The End Collective is a California-based art collective founded by the artists KO and Filthy Phil. Together with artists Sleepy Demon and Nakal they built a platform for artists to broadcast their anti-Trump artworks. “Race to the End” is a State of the Nation address delivered from a puppet of Trump designed with a “MAGA VOX” brand TV for a head that displays all artist submissions. The experience is set in an immersive replica of the Oval Office constructed at historic Mack Sennett Studios (Charlie Chaplin, Mabel Normand) in Hollywood. Beginning on October 1st, 50+ different artists will present their works broadcasted non-stop simultaneously on multiple streaming sites (Twitch, YouTube, etc). Additionally, with Trump doing everything in his power to push the country into a tin-pot-dictatorship, we felt an obligation to create a compelling platform that offers artists a chance to exercise their freedom of speech and to encourage everyone to vote out 45 in November.

“Every joke is a tiny revolution” George Orwell, Funny, But Not Vulgar. 1945

Orwell believed that humor and satire have the power to “bring the mighty down from their seats.” That same belief holds true today. Now more than ever, we need to knock corrupt men like Donald Trump from their chairs. His negligence has caused immeasurable harm to the United States. And as he threatens to take away more of our rights each day, we will fight back with merciless art that tears at his fragile ego. The End Collective created “Race To The End” as a platform for artists to exercise their freedoms of speech and expression. We watched as the news and media platforms of our day suffered from the same unwillingness to “upset the established order” that Orwell identified in Britain at the time. The consequence of these weak media personalities unwilling to clearly condemn Trump’s overt lies and falsehoods was the rise of a charlatan from reality TV to the Presidential stage. His abuses of power are staggering, and yet few are willing to say what we’re all thinking. We won’t relent where the others have failed. Our satirical broadcasts exist to expose the flaws and weaknesses of Donald Trump and every other white elephant in the room. At a time when misinformation campaigns and censorship distort what the public hears, we feel it is our duty to create a new political broadcast that clearly and unapologetically illuminates the faults of these evil men. So tell your friends.

And tell your enemies.
We want everyone to hear.
Because Orwell was right.
“The bigger the joke, the bigger the fall.”

If of interest for coverage, please visit:

To support us, our GoFundMe is

Thank you for your consideration

Race To The End – Overview Video