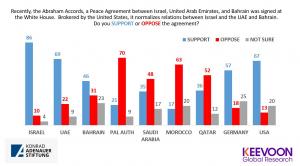 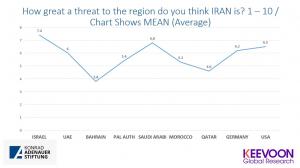 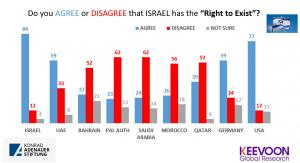 There is a real basis for regional cooperation and trade but it will take some time until people catch-up to their Government’s enthusiasm.”
— Dr. Alexander Brakel, Director, KAS Israel

JERUSALEM, ISRAEL, November 17, 2020 /EINPresswire.com/ — An extensive 9-country survey commissioned by Konrad-Adenauer-Stiftung (KAS) in Israel, a German foundation and Think Tank, found that the United Arab Emirates and Bahrain have very different views on the recent Abraham Accords their Governments signed with Israel. 69% of Emiratis support the accords with only 22% opposing them. A plurality of Bahrainis, 46%, support it with 31% opposing it. Israelis are much more in favor with 86% supporting it and only 10% opposing it. Even among Israeli Arabs 72% support it and only 21% oppose the Accords. One-third of Saudis and Qataris, 35% and 36% expressed support for the Accords signed by their neighbors with Israel with 48% and 52% opposing in those countries.

Dr. Alexander Brakel, Director, Konrad-Adenauer-Stiftung (KAS) in Israel: “The geopolitical reality in the Middle East has changed rapidly over the past few months. Everyone is wondering if this “warm peace” will spread to other Gulf States. This poll, sets the benchmark for understanding attitudes and opinions of citizens in Israel, UAE, Bahrain, Palestinian Authority, Saudi Arabia, Qatar, and Morocco towards each other, regional peace, and strategic threats. There is a real basis for regional cooperation and trade but it will take some time until people catch-up to their Government’s enthusiasm”

Security cooperation and trade are seen as the most important areas for relations between Israel and the UAE and Bahrain. Even among those countries who opposed the agreement, more than two-thirds answered the question which indicates a de-facto acceptance of this new reality.

Israelis have very favorable views of their new counterparts in the UAE (67% vs. 25%), and Bahrain (49% vs. 32%) but the feeling does not seem mutual. Only 46% of citizens in the UAE have favorable views of Israelis versus 43% with unfavorable views. In Bahrain it is much worse with only 31% with favorable views towards Israelis and 48% with unfavorable views. Mitchell Barak of KEEVOON Global Research who conducted the poll: “Israelis like the Emiratis and Bahrainis much more than they like Israelis. There does seem to be a disparity between them. The Abraham Accords caught everyone by surprise and for Israelis it was a pleasant and long-awaited one, but for the people of the UAE and Bahrain, they seem to need some more time to process it. Given the attacks on them from the Palestinians and various criticism from neighboring Gulf States, this may take some more time for people to get used to.”

The Palestinians were viewed very favorably by all of the citizens of the Gulf States. 80% of Qataris, 74% of Emiratis, 73% of Moroccans, 71% of Saudis, 70% of Bahrainis. 59% of Israeli Arabs viewed them favorably while only 13% of Israeli Jews. On the question of whether or not there should be a Palestinian State there was across the board support among Gulf State citizens surveyed. 90% of Moroccans, 88% of Saudis, 85% of Qataris, 81% of Emiratis, and 72% of Bahrainis. Only 35% of Israelis, both Jews and Arabs support the creation of a Palestinian State.

According to the survey, Israel is still fighting for its right to exist in the Middle East. Only in the UAE was there a majority of support with 59% agreeing and 33% disagreeing. There was significant opposition to Israel's right to exist in Saudi Arabia and among West Bank Palestinians (62%), Qatar (57%), Morocco (56%), and Bahrain with 52% opposition even though they recently signed the Abraham Accords to normalize relations with Israel. It is significant that about one-quarter to one-third of respondents in Qatar (39%), Bahrain (27%), Morocco (26%), Saudi Arabia (24%), and the Palestinian Authority (23%) agree that Israel has the right to exist.

When asked about which country do you think threatens regional stability most, for Israelis and Emiratis it is Iran with 45% and 27% respectively. Interestingly, Israel is seen as the greatest threat to regional stability by 43% of Moroccans, 39% of Qataris, 37% of Palestinians (West Bank), 33% of Saudis, 24% of Bahrainis. Iran is seen as a threat by 25% of Saudis and 18% of Bahrainis. When asked specifically to rank how great a threat to the region Iran is on a scale from 1-10 it seems that it is not a great concern to most people polled. Israelis and Saudis consider it somewhat serious at a mean of 7.4 and 6.8 respectively. Emiratis gave it a 6 while the Palestinians and Moroccans rated it a 5.4 and 5.3. The Qataris and Bahrainis don’t consider it a threat at all as they gave it a 4.6 and 3.8.

Finally, the poll tried to understand if there is a country or entity that can most effectively broker a deal between Israelis and Palestinians. There was no clear favorite here with only one-third of Israelis (34%) choosing the United States and their next most popular response was Saudi Arabia with 12%. For the Palestinians, the European Union was most favored with 12% followed by the United States with 9%.

In total there were 4,014 respondents in Israel (589), UAE (399), Bahrain (317), Palestinian Authority (West Bank 404), Saudi Arabia (505), Qatar (267), Morocco (499), Germany (500), and the United States (534). The data was collected entirely on mobile telephones, in-APP. It was a representative sample in each of the countries where quotas were set for gender and age based on the census reports. Data collection took place between 18 October and 2 November. The Margin of Error varies between 4.04% and 6.00% depending on the country. The was a screener for nationality on the Gulf States to ensure that respondents were citizens.

For the full results of the survey