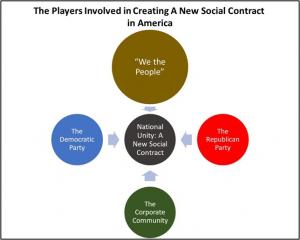 “Positive Populism:” The Role of the People in Saving Liberal Democracy

SOLON, OHIO, UNITED STATES, April 14, 2021 /EINPresswire.com/ — In response to their losses in the 2020 elections, Republicans have proposed nearly 400 bills in 47 states designed to limit voting access primarily for black and brown people and ultimately thwart the people’s will if Republicans lose future elections. Alternatively, Democrats passed HR 1 and HR 4 designed to expand voting rights for all Americans. This conflict reveals that there is currently an existential threat to the very foundations of American liberal democracy. In the battle over the viability of liberal democracy, both Republicans and Democrats see the corporate community as the wild card in advancing their position. Both parties call on the corporate community to support their side in the fight or else face retribution.

However, the corporate community cannot be the ultimate arbiter of this political impasse. The corporate community is a prisoner of the current political dynamic like the Republican and Democratic Party. The real wildcard in the process of saving liberal democracy is “We the People.” If the people band together, identify a vision of America they want, and demand their representatives to deliver it, they can change the future for the better. Recent public opinion surveys show that strong pluralities to overwhelming majorities of Americans agree on more than 150 issues. So, we now have a once-in-a-lifetime opportunity to find common ground, make common cause, and propel the types of changes to the political, social, and economic systems that we want. We, the People, can no longer wait for others to save liberal democracy. We must step in and save it ourselves.

A mobilized public is potentially the most influential participant in the political process, as shown in the news release’s schematic. They could compel the others to come to the table and work together to fashion a new social contract for America. What they need is a strategic plan outlining the process. Washington & Associates, Inc. is proffering the “Project to Save Liberal Democracy (PSLD).” Our purpose is to advance the will and the welfare of the people. PSLD calls for implementing Equity Management-Plato (EM-P). EM-P is the “top-down” portion of our solution. EM-P is to be implemented by government agencies. It is designed to create just, fair, and inclusive societies. A related, “bottom-up” part of the PSLD is the International Democracy Project (IDP). The IDP outlines a strategy for creating an international movement rooted in “positive populism” that marshals pro-democracy groups, agencies, entities, groups, and individuals to unite to create a movement that supports EM-P and is designed to counter authoritarianism. The two halves of the PSLD work together to reimagine and reinvent liberal democracy in America and worldwide.

So, how will the IDP portion of the PSLD work? The IDP calls for voters to be willing to eschew their party affiliations and affirmatively declare their willingness to only vote for “representatives” (regardless of party) who are willing to take their constituent’s wants and needs into account when making public policy. The IDP would go a long way toward fixing the vulnerabilities and dysfunctions in American liberal democracy. Because of the overlapping consensus on so many issues, an electorate engaged in this way would change the American political dynamic. It could force political representatives to work for the people rather than just special interest groups. It could force a consensus in policymaking. It could force the corporate community to become good-faith partners in the economy’s functioning. It could force politicos to become good-faith partners in the functioning of the political system.

The entire movement needs a strategic plan. The PSLD is the only viable strategic plan capable of achieving the goals we are pursuing. By following the strategic, tactical, and operational concepts in the “PSLD, we can help fix the dysfunctions and vulnerabilities in American Liberal democracy. However, if we do not come together at this time, we can kiss all we hold dear goodbye. By adopting the PSLD, pro-democracy groups and individuals everywhere can mobilize, organize, and spread the word among pro-democracy and anti-democracy agencies, entities, and individuals that saving liberal democracy is possible and creating just, fair, and inclusive societies is also possible.

We at W&A feel that an overwhelming majority of Americans will embrace EM-P, justice, fairness, and inclusion and eschew authoritarianism. A summary of the PSLD, EM-P, and the IDP are contained in the white papers mentioned below in the following white papers on the Washington & Associates, Inc. website:

The white papers should be read in reverse order: 007, 005, and finally 003. Collectively, they outline the way out of the current morass. From this day forward, W&A is beginning its formal outreach efforts to pro-democracy parties, agencies, entities, groups, and individuals to build that positive populist movement. For more on how PSLD, EM-P, and IDP will work, download Washington & Associates, Inc.'s previous news releases.