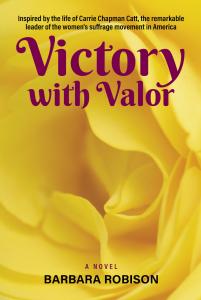 Without women voters, there would be no women in office. Read “Victory with Valor” by Barbara Robison for the story of women’s suffrage.

On April 30, Joe Biden and Kamala Harris will complete their first 100 days in office. The novel “Victory with Valor” celebrates a much earlier milestone.

Carrie, an Iowa farm girl, put herself through Iowa Agricultural College, the only woman in her graduating class. Kamala graduated from Howard University, a Black college in Washington D.C., and the University of California Law College.

Oddly, both women made history during pandemics. Carrie’s suffrage work was nearly derailed by the Spanish flu while Kamala campaigned during the COVID-19 pandemic.

Feminists and history scholars will study the vice president’s life and accomplishments for generations to come, and Americans have the 19th Amendment to thank. Without women voters, there would be no women candidates. "Victory with Valor" is inspired by the life, courage, commitment, and grassroots strategy of Carrie Chapman Catt, the remarkable leader of the women’s suffrage movement in America and a catalyst for getting the 19th Amendment passed.

"Victory with Valor" makes a thought-provoking book club choice and the perfect gift for fans of historical fiction. It is available on Amazon as a paperback or e-book.

The author’s grandfather was Carrie Chapman Catt’s cousin, so as a child she heard about Carrie’s work and her place in history. In 2020, she used her state’s stay-at-home order to concentrate on finishing "Victory with Valor" after years of research. Readers may ask her questions through her Goodreads page.

Journalist Susanne Whatley interviews Barbara Robison about “Victory with Valor,” her novel based on the life of suffragist Carrie Chapman Catt.