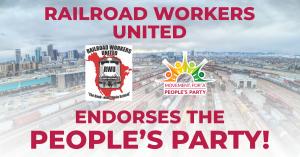 Chicago is the central hub for rail convergence.

The People’s Party is proud to announce the endorsement of Railroad Workers United, a cross-craft organization of non-management railroad workers from all carriers and railroad unions. Founded in 2008, RWU works to build rank and file power and solidarity among all railroad workers in North America.

"RWU has long proclaimed its discontent with the two established parties,” said General Secretary Ron Kaminkow. “Working people in the United States need a political party of their own that is not beholden to big money. We need a People’s Party."

North American railroad workers are divided into different unions based on their craft of work. On some short lines, workers are not unionized at all. The Chicago-based RWU advocates for a coalition of railroad unions that would negotiate contracts as a united front, putting an end to rail carriers’ “divide-and-conquer tactics,” Kaminkow said.

“We urge all railroad unions to join in our efforts to build a People's Party in the United States,” RWU said in a statement. “On issue after issue – whether it be single-payer health care, a rise in the minimum wage, free or reduced college tuition, funding for public transportation and education, environmental protection, preservation and expansion of union rights, and more — the majority of the people are in support. Yet our two political parties are incapable of putting forward a progressive agenda that serves the needs and desires of the majority. Therefore, RWU supports the efforts to build a new political party that can do just that!”

In the United States, there are 13 unions representing railroad workers plus several more in Canada and Mexico. The rail industry, which once employed 1.5 million Americans, has lost 60,000 jobs in the last two years alone and now employs 140,700 people, according to the Labor Department.

Employment losses are being exacerbated by several factors: trade wars, automation, job consolidations, loss of carload traffic, the industry's quest for short-term profits and record low operating ratios, and the rail unions' inability to negotiate as one forceful unit. Railroad workers have suffered for decades under both establishment parties. Still, railroad and rail transit workers combined make up the most unionized sector of the U.S. economy.

“The People's Party supports Railroad Workers United and their work of amplifying the voices of railroad workers in North America,” said Labor for a People’s Party Coordinator Todd Jelen. “People of all professions and crafts must organize and fight against the corporate power structure that suppresses the freedom, well-being and dignity of workers. RWU has led that fight on our railroads.”