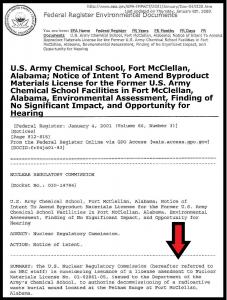 The 2001 NRC/EPA agency notice of a radioactive cleanup action. 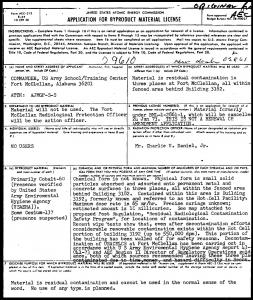 Numerous new hazard sites were discovered over the years, yet no health advisories were ever issued to the former soldiers of Fort McClellan.

The proposed decommissioning action will have a positive environmental impact on the water quality in the area since low-level radioactive contamination will be removed from the soil above the aquifer”
— Nuclear Regulatory Commission, 2001

ALBANY, NEW YORK, USA, April 20, 2021 /EINPresswire.com/ — On January 4, 2001, the Nuclear Regulatory Commission and the Environmental Protection Agency issued a joint public notice announcing their upcoming plan to begin a remedial cleanup action at the former Fort McClellan, Alabama Army base. The cleanup action was to remove a massive burial mound of radioactive material holding Co-60 cobalt lead and Cesium-137 atomic waste. The history of papers surrounding the site indicate it had languished for entire decades while military authorities made only mediocre efforts to contain it. While the announcement was headlined as having a finding of “no significant impact”, the rest of the details in the announcement held clues to a different story.

A finding of “no significant impact”, was only to say that the removal action itself was not expected to have widespread environmental implications for the area. But buried within the details of the papers, other contradictions were found. Environmental authorities were so worried at the time about the disturbance of particles during the removal action, that flight contractors were hired to conduct air sampling from the sky to take periodic measurements. Construction workers were required to fully suit up with personal protection gear. Then in 2004, one of the air sampling planes discovered new radioactive readings on their detection equipment. They discovered that located right near the original radioactive burial mound, there was also a second and undiscovered radioactive site giving out detectable emissions from an unknown source. The new site was found to be caused by a naturally occurring layer of shale rock that was emitting radioactive levels of uranium.

There is no indication across the pile of military history reports that suggests any reevaluation was ever done to determine if a new health risk threat was posed to the soldiers who had been stationed there. The combined emission levels of both sites should have been considered together as an environmental mixture. This evasion of process forms the crux of arguments which are now coming from the service veterans who were there. They are working towards the goal of obtaining new reports from the GAO Office and the Environmental Protection Agency regarding the decades of circumstances surrounding the combinations of exposures they passed through while they were on military active duty at the base. The group is found on Facebook at their reporting page called Toxic Exposure Army Veterans of Fort McClellan. They have compiled an impressive cache of environmental source papers to make their case with.

The McClellan Vets are working from a defined toxic exposure profile of ten toxic or hazardous spill sites which spanned across four different locations either at or around the former Army base. This includes all the atomic and radiological sources that were found across Pelham Range and the main base of Fort McClellan. The list of their concerns includes radiological isotope spills (called “hot cells”) that ran for a time prior to each discovery. There were atomic emission rods still found in the ground and abandoned from prior training classes. The atomic rods were used to simulate a nuclear fallout event that would be sufficient to set off military detection devices for training purposes during the Cold War Era. According to the source papers, there were hundreds of these rods congregated into a single parcel area that were all giving off emissions.

The veterans feel they have a compelling position to be reckoned with. If sites were deemed hazardous enough to require federal agency remedial cleanup actions, and to also require the cleanup workers to be suited up for protection when doing so, then who is behind making the epic bad decision of saying that soldiers who were stationed there were never exposed to anything dangerous to their health? The veterans are troubled by the sheer volume of new discoveries that were made for hazardous or toxic spill sites as the base was inching its way towards closure. They say that that violations have likely been made against the EPA’s own regulatory statutes that warns of exceeding the known safety limits for “cumulative effects” of multiple spill sites from piling up at a single location during the the same span of years (40 CFR 1508.7 and 1508.8).

The veterans accuse the (NRC) of pandering to McClellan authorities just so they could continue with their licenses and permits to operate. The veterans have found no evidence of concern shown for their well being by any agency that was involved in environmental oversights at McClellan. They additionally accuse the (NRC) of possibly using radiation threshold limits that were way too high for the area when placed in the context of all other known chemical contamination sites that were active during the same set of years. They point to the fact that Edgewood, Maryland was using the entire base as a secret remote test location for outdoors (CBRNE) military field experiments from 1950 to 1973.

The published health sciences for significant metallic lead exposure have pointed to a health risk outcome of respiratory conditions. This happens to be a match to the medical histories of many who are in the McClellan Vets group. The VA does not automatically screen for matching health patterns that emerges from soldiers according to their military base locations. So, it’s left up to the veterans to do the science matching for themselves. They have to locate the health sciences that are matched to the toxic spill sources from McClellan and then compare those to their own medical histories. They go on to point out that this is only sufficient for estimating the possibilities of an aggregate exposure event for each veteran. The method is not a replacement for a higher practitioner review which is needed to cumulate the new toxicity values for all the exposure combinations that were active during the same set of years at the base. Such a review can only be accomplished at the Environmental Protection Agency, which the veterans are working to obtain.