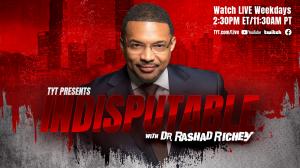 ‘Indisputable with Dr. Rashad Richey’ will premiere on TYT via the network’s digital platforms and will be viewable on YouTube, Facebook and Twitch. The 90 minute program will air Monday through Friday.

TYT (TYT; www.TYT.com), the #1 most engaged news and politics network, announced today that it has partnered with news radio host Dr. Rashad Richey on a new show: Indisputable with Dr. Rashad Richey. U.S. Senator Jon Ossoff and Killer Mike are among the scheduled guests. In the show Dr. Richey will provide insightful commentary on the top news stories of the day, interview politicians and newsmakers, and debate conservative-leaning guests. The addition of ‘Indisputable with Dr. Rashad Richey’ on TYT marks a year of expansion for the network as it aims to bring on new voices who have a shared interest in driving positive change by delivering authentic political and news commentary.

About his new show on TYT, Dr. Richey said, “I've been a fan of TYT for years. Their commitment to truth and fighting for social equity is simply unmatched. It's an honor to become part of the on-air team and continue the legacy of fact-based, no spin broadcasting that moves the needle for progressive policies. Cenk Uygur created something really special with this network and it's exciting to be part of it.”

Most recently, Dr. Richey was recognized by the Georgia Greater Black Chamber of Commerce as Media Personality of the Year. He was also nominated for an Emmy Award for his television news coverage of a small Georgia town still dealing with the very real effects of racism and systemic segregation.

TYT founder and host of The Young Turks Cenk Uygur said, “Dr. Richey is a powerhouse. He’s unafraid to speak the truth and engage in spirited debates with conservative personalities. Dr. Richey will be a great addition to our growing network of strong progressive voices.”

‘Indisputable with Dr. Rashad Richey’ will premiere on TYT via the network’s digital platforms and will be viewable on YouTube, Facebook and Twitch. The 90 minute program will air Monday through Friday.

ABOUT TYT
TYT is America's largest online progressive news network and the #1 most engaging news and politics network. The award-winning network is one of the top multi-platform online content creators, generating over 500 million views a month.

Cenk Uygur was recognized by Mediaite on their list of Most Influential in News Media 2019. Host Ana Kasparian was named to the 2016 Forbes 30 Under 30 Media List and The Daily Dot’s 20 Women of YouTube list. The Young Turks won the Audience Honor for Overall YouTube Presence in the 2018 Shorty Awards and the Webby People’s Voice Award for News and Politics – Series. In 2017, The Young Turks received best in News and Culture at the 7th Annual Streamy Awards, won the 21st Annual People’s Voice Webby Award for Online Film & Video – News & Politics series, and was also recognized with the Audience Honor at the 10th Annual Shorty Awards under Overall YouTube Presence. The Young Turks was awarded the Imagen Vision Award and the Vote It Loud Fifth Estate: Champion in Media Award for Best in New Media in 2016. In 2015, The Young Turks was named to Variety’s FameChangers List (No. 7) and The Hollywood Reporter’s Next Gen List (No. 1 in the News category).

TYT includes owned and operated and partner shows such as The Young Turks, The Damage Report, TYT Investigates, Happy Half Hour, and more.

ABOUT Dr. Rashad Richey
Dr. Rashad Richey is university professor, lecturer, broadcaster, political analyst and conveyer of facts. His intelligent and opinionated delivery style led him to being voted “Best Talk Radio Personality in Atlanta” by readers of the Atlanta Journal-Constitution for his weekly morning program, The Rashad Richey Morning Show, on News & Talk 1380-WAOK (7am-10am) and named “Most Trusted Voice in Atlanta Radio” by readers of the Atlanta Business Journal. Rashad, a Political Analyst for CBS News Atlanta, was also nominated for an Emmy Award in 2019 for his riveting television news coverage of a small Georgia town still dealing with the very real effects of racism and systemic segregation.

Nationally, Rashad is featured for his political analysis and commentary on TYT, MSNBC, BBC America, Black News Channel, Fox News and other networks. Beyond broadcasting, Rashad serves as the President of Rolling Out, a national multimedia urban, millennial powerhouse with 2.8 million readers monthly and a combined social media following of over half-million. Rolling Out is the largest, free-print, Black-owned publication in America, focusing on entertainment news, politics, society, business, lifestyle and culture.

Rashad is the recipient of a Presidential Lifetime Achievement Award from President Barack Obama for his work with gang-affected youth and at-risk communities. In 2019, Rashad was named 40 Under 40 by the Atlanta Business Chronicle and one of Georgia’s most influential people. Rashad also landed the cover of Atlanta Business Journal’s commemorative edition titled, “Top 25 Most Extraordinary Atlantans”. The Georgia Black Chamber of Commerce recently named Rashad “Media Personality of the Year” in 2021.

Rashad strives daily to utilize his platforms to leverage equity for others. He is a proud member of the American Association of University Professors, National Association of Black Journalists (NABJ), Atlanta NAACP, Atlanta Press Club as well as other civic organizations. Through the years, Rashad has