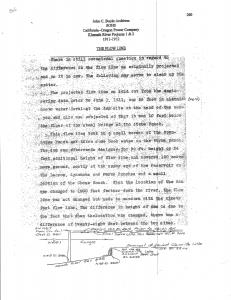 Famous engineer and dam builder J.C. Boyle, whose stock and trade was based on accuracy made a drawing of the natural lava dam and lake ‘Clammittee’ when he arrived in 1911 to build Copco 1 dam 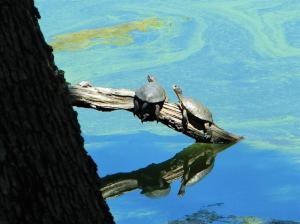 A pair of threatened Western Pond Turtles at Copco Lake. Just one of many threatened and endangered species of flora and fauna. Photo: William E. Simpson II 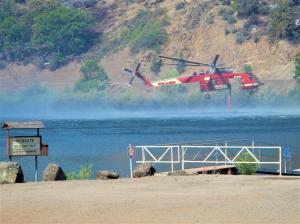 Firefighters drew over 1-million gallons of water from Iron Gate Lake (one of the lakes behind the Klamath River dams) to fight the 38,000-acre Klamathon Fire that threatened Ashland Oregon and Cascade-Siskiyou National Monument Photo: William E. Simpson II

Beneficial Use – CAL-FIRE drafted over 1-million gallons of water from Iron Gate Lake to battle the 38,000 acre Klamathon Wildfire that was stopped before it incinerated the Cascade-Siskiyou National Monument and Ashland OR: Photo by; William E. Simpson II

Even in light of rock-solid evidence that debunks the myths supporting the removal of Klamath River dams, some media outlets are sitting-on the facts. WHY?

Geologic and engineering evidence prove there was no Salmon migration on the Klamath River past Ward Canyon for thousands of years, the present-day site of Copco 1 dam”
— William E. Simpson II – Naturalist

1) Geologic and engineering evidence prove there was no Salmon migration past Ward Canyon for thousands of years (site of Copco 1 dam).

Salmon couldn't have migrated past the series of high natural lava dams that blocked fish migration at Ward Canyon for many millennia. Ward Canyon is the present-day site of Copco 1 dam.

Under ideal conditions, salmon can jump a maximum of 12-feet. So even the smallest of the series of natural lava dams, standing at 31-feet-tall, would easily stop Salmon migration.

The highest of the series of natural lava dams that blocked fish migration at Ward Canyon stood for thousands of years.

That lava dam was 130-feet tall, which was as high as the current man-made Copco 1 dam, and that ancient 130-foot-tall lava dam formed a lake ('Clammittee Lake') equivalent in size to the modern-day Copco Lake, which sits in the same foot-print of the ancient Clammittee Lake.

In 1911, when the famous engineer and dam builder J.C. Boyle arrived at Ward Canyon on the Klamath River to begin construction of the Copco 1 dam, he saw and recorded the *existing* 31-foot tall natural lava dam that was holding-back the Klamath River into a large natural lake called 'Clammittee Lake'.

This natural 31-foot tall lava dam and Clammittee Lake had existed for thousands of years and into modern times (1911). As a result of that longstanding lake, a myriad of lifeforms established habitats in and around Clammittee Lake.

If these critical habitats are suddenly removed by removing the dams and draining the lakes, that longstanding intricate web-of-life will collapse, resulting in the loss of untold numbers of rare, threatened and endangered species.

As Geology and recorded documents from 1911 show, Nature, not man, ordained that fish would not migrate past this point on the Klamath River.

Given the foregoing facts, it becomes very clear that even the notion of installing fish-ladders in this area is ill-advised!

Nature had barred fish migration for millennia past Ward Canyon, so a sudden change in that, would likely create a whole new set of problems!

These natural fish barriers arguably allowed what is known as allopatric speciation to occur, and the resulting 'Redband trout', which are actually a land-locked salmon that are most closely related to steelhead, and not to sockeye or coho salmon. Interestingly the natural range for Redband trout on the Klamath River is exclusively 'up-river' from Ward Canyon according to experts.

Redband trout can reach 24-30 inches in size and up to 30-pounds in weight. As a result of their size, in the 1800's fisherman called them salmon, because they resembled salmon. In the archeological digs of the Klamath and Modoc tribes, no salmon heads or jaw bones have been found, only body bones.

It is well known that the largest indigenous tribe in the area of Ward Canyon was the Shasta Tribe. In fact, the entirety of the portion of the Klamath River where the Klamath dams are located are on the lands that were exclusively inhabited by the Shasta.

The Shasta, and no other tribe, fished the area immediately above and below the lava dams on the Klamath River, and they caught both anadromous and non-anadromous salmonoids.

Anadromous Salmon were traded to the Klamath and Modoc tribes by the Shasta. These anadromous Salmon had their heads removed and they were taken on poles to other tribes for trade.

This of course explains the archaeological results of no heads or jaws of anadromous salmon on tribal lands of the Klamath and Modoc tribes.

On top of the foregoing hard science and engineering evidence, we now also have a board member of the Klamath River Renewal Corporation, Mr. Glen Spain saying that removing dams is about money, not salmon!

More about that here: https://www.einnews.com/pr_news/546614530/compelling-facts-condemn-krrc-s-proposed-klamath-river-dam-removal-plan

It's important to note that the non-profit shell corporation, Klamath River Renewal Corporation (KRRC) was created in full cooperation with PacificCorp as a means to shield PacificCorp from the massive liabilities that are associated to what is easily the most risk-laden dam removal project ever proposed!

This Congressional Act provides for 'beneficial uses' of the water impounded by the dams to the People of Jackson County and Oregon, and Siskiyou County and California.

In regard to distribution of water under the Act, priorities in order are:

(a) Domestic use,
(b) Irrigation use,
(c) Recreational use, including use for fish and wildlife,
(d) Industrial use,
(e) Generation of hydroelectric power,
(f) Such other uses as are recognized under the laws of the state involved.

(Note: Industrial use arguably refers to water for wildfire fire-suppression; and even though it is not codified, the dams do in fact provide material flood control protections for communities and infrastructure down-river from the dams)

3) The loss of the lakes and critical shoreline ecosystems and habitats will devastate the resident threatened and endangered species of flora and fauna.

The loss of this critical habitat, which was established over millennia in and around 'Clammittee Lake', will also adversely affect resident and migratory birds that are strictly protected from 'incidental taking' by California law and Assembly Bill AB-454, Migratory birds: California Migratory Bird Protection Act.

According to a 2006 Department of Interior publication; there are hundreds of species of flora and fauna, and that flora and fauna will be placed at risk if Copco and Iron Gate lakes are drained:

The eleven-miles of the Klamath River Canyon where these lakes are located contains an amazing diversity of wildlife, including 89 species of birds, dozens of reptiles and amphibians, several species of fish and 71 species of plants including trees, grasses and forbs. Some species of this localized flora and fauna are threatened or endangered.

These, and other facts related to the impacts of dam removal on the environment and ecosystem have been understated and obfuscated by dam-removal proponents, largely made-up of the minority-consensus groups and fishing-zealots supporting KRRC's reckless plan.

4) Copco and Iron Gate Lakes are formed by two of the four Klamath River dams. They hold a reserve of 45-Billion gallons of fresh water that is desperately needed, during what experts predict will be a period of extreme drought caused by Climate Change. The critical reserve of fresh water is essential for fighting catastrophic wildfires.

These two lakes hold a reserve of 45-Billion gallons of precious fresh water that is desperately needed for domestic wells (drinking, bathing and cooking).

There is no doubt that the half-decade-old obsolete $450-million (so-called “guaranteed budget”) budget that KRRC has pitched, is grossly inadequate.

A more realistic budget, is closer to $900-Million given the inflation over the half-a-decade since the now obsolete budget was calculated, coupled with huge cost increases (doubling) for construction related costs over the past year (2020-2021) due to COVID economics.

There is also no doubt whatsoever that the proposed project is laden with huge unprecedented risks, as never seen before, at every phase. And those risks and massive liabilities are like a hot potato that Pacific Corp wanted to dump. And now it seems they may have; right into the laps of California and Oregon taxpayers.

And, in a recent Decision and Order by the Federal Energy Regulatory Commission (‘FERC’), item number 34 warns that:

“As part of the January 13, 2021 transfer application, the States of Oregon and California have agreed to be co-licensees with the Renewal Corporation; thus, the States will not be shielded from liability.”

We have already seen smaller project outcomes that spell disaster for the massively underfunded KRRC dam removal budget, which puts Oregon and California taxpayers on the hook, for what could be a massive financial liability at a time when state budgets are strained to the max from COVID and wildfire disasters.

According to the Penninsula Daily News in Port Angeles Washington:

The estimated cost of removing the Elwha and Glines Canyon dams from the Elwha River has increased from the original cost projection of $135 million in 2001, to later projected cost of $308-million.

Another accounting of the ‘projected costs’ regarding removal of the two Elwha dams compared to the actual costs should be a red-flag for the costs of the much larger and far more ambitious project and estimated budge of $450-million to remove four Klamath River dams:

“Removal of the Elwha Dam began in September 2011 and was finished in spring 2012, ahead of schedule. Removal of the second dam, the Glines Canyon Dam, was completed on August 26, 2014. The dam removal process was originally projected to last two and a half to three years. The estimated cost of removing both dams was $40 to $60 million. The total cost of the Elwha River restoration is approximately $351.4 million.” ~ Wiki

In the foregoing example, the smaller and simpler 2-dam removal project compared to the four dams on the Klamath River, the costs on that project tripled from what was originally projected.

And in the case of Elwha River dams, the potential for environmental, ecological and private property damages were far less.

The budget for the removal of the four (4) dams on the Klamath River was calculated using economic costs and metrics that were already many years old prior to the beginning of COVID economics, which began in 2020.

Of course, anyone in business knows that if you projected costs are based on a ‘best case’ outcome, and a mediocre, or worse yet, a bad outcome evolves, costs, damages and liabilities can escalate very quickly and steeply.

The Associated General Contractors of America has issued a new report and graph-analyses showing the huge impacts that COVID economics (period April 2020 thru February 2021) has had on skyrocketing costs related to construction projects.

The Associated General Contractors of America study exemplifies the huge cost increases and long delays that have only recently occurred, and certainly years-after KRRC’s budget projections for their dam removal project were calculated.

For the purpose of cost-impact analyses, the COVID economics study began in April 2020 thru February 2021. (https://www.agc.org/sites/default/files/AGC 2021 Inflation Alert – Ver1.1.pdf).

"The construction industry is currently experiencing an unprecedented mix of steeply rising materials prices, snarled supply chains, and staffing difficulties, combined with slumping demand that is keeping many contractors from passing on their added costs”.

This brand-new report from the Associated General Contractors of America report spells financial disaster for KRRC’s project.
And the burden of that disaster will surely fall upon the weary shoulders of California and Oregon taxpayers.

All things considered, and based upon what we do know, a budget in the realm of $900-million dollars would be in line with proper updates and adjustments to the old budget of only $450-million.