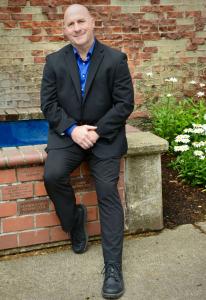 Are 2 political parties really taking care of America's needs? One Oregon Maverick is throwing his hat in the ring to shake up the status quo.

Struggle knows no race, no gender and does not care how old you are. IT'S TIME TO ELECT PEOPLE, NOT POLITICIANS.”
— Tim Harrold

A recent Gallup poll shows 62 percent of Americans think the 2-party system is broken and a third party or alternative is needed. Meet Tim Harrold a rugged maverick ready to upend the status quo. Tim a security expert with nearly 3 decades in the field knows the importance of integrity, leadership, and an honest day’s work. This football and weightlifting coach believes in a servant leadership style where his fellow Oregonians come first. Tim is not a trickle-down politician but rather an independent who works alongside his community. No national party. No agenda. No debt to big corporations – just a clean campaign for the hearts and minds of the good folk of Oregon.

Raised with a love for the environment and a healthy respect for nature’s bounty in the Silicon Valley area of central California, Tim learned the tenets of hard work by tending to the family animals. The hours he spent feeding the chickens, rabbits, and pigs or mucking out the stalls after school laid the foundation for a life of service. Never one to give up a fight for a good cause, Tim is ready to take on both parties to be a voice for the voiceless in Oregon. The self-made man with a heart for the Beaver state is taking this battle all the way to Salem. The longtime weightlifter and coach who was a 3-sport athlete says it takes dedication and disciple to succeed.

Working security in the Portland Metro area for nearly 20 years, Tim has seen the dark side of Oregon and the pressing needs of its residents. Tim has a real plan for law enforcement reform that includes a commonsense approach to transform the system which offers little more than 4 hours of self-defense and de-escalation training to officers. Tim has worked on both sides of the streets advocating for the homeless and addicted to securing our great nation. As a former police officer who served bravely in North Carolina, he is uniquely positioned to understand the concerns of the citizens and says, “police do not need to be ‘defunded’ they need to be correctly trained and supported.”

Another passion for Tim is solving the homeless crisis. According to the US Department of Housing and Urban Development on any given day, 14,000 homeless people are roaming the streets of Oregon. Those nameless, faceless bodies all have stories and Tim has heard their tales of woe to find that many are veterans, former business owners, and families who were living paycheck to paycheck. Tim has a plan to right this social wrong by building a coalition of State government agencies, local municipalities, non-profits, and small businesses to stem the tide of homelessness.

As a father of one terrific daughter, Tim’s heart goes out to the homeless children who are longing for the security of a permanent dwelling. According to the US Dept of Education in any given year, more than 23,000 Oregon children go without a safe place to sleep but Tim has a plan to create a roadmap to permanent lodgings for Oregon’s forgotten children. Through this coordinated effort to stamp out this crisis, Tim believes “we can help those who really want help.” Tim proudly acknowledges he and his wife of 25 years have had their financial struggles. He knows what it is like to juggle bills and take on a second job to make ends meet. “Struggle knows no race, no gender and does not care how old you are. IT'S TIME TO ELECT PEOPLE, NOT POLITICIANS.” says Tim.

Tim is ready to dig deep to change Oregon’s present structure filled with privileged politicians. He is throwing a monkey wrench in the well-oiled political machine to make the powers that be take notice of the common person. Tim was not born with a silver spoon in his mouth or a bank of political clout instead he has “boots on the ground” experience to steer Oregon in a different direction. From the peak of Mount Hood to the banks of the Snake River and everywhere in between, Tim is ready to be the Governor of all the people of Oregon. Not just a Governor for the elite or the connected business community but a Governor for every person.