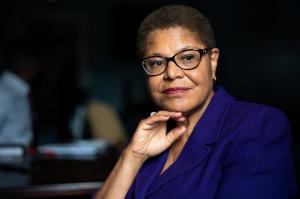 Congresswoman Karen Bass (D-Calif) is the chair of the Subcommittee on Africa, Global Health, Global Human Rights, and International Organizations

WASHINGTON, D.C. , UNITED STATES , September 17, 2021 /EINPresswire.com/ — A coalition of advocacy and human rights groups based in America and Europe have deliberated in issuing this important joint press release in response to a recently surfaced video where Representative Karen Bass. The U.S. Representative for California's 37th congressional district, Karen Bass, met with Theodros Teshome Kebede, a pro-Ethiopian government filmmaker in July 2021. A very troubling video clip of the virtual meeting between Representative Karen Bass and the pro-Abiy Ahmed filmmaker is circulating on social media, causing alarm and disappointment among constituents in the United States and communities worldwide. In the video, Mr. Kebede is seen making offensive comments that fall under the definition of hate speech; he is also visibly promoting violence against ethnic Tigrayans in Ethiopia.

The Ethiopian government and its allies have been accused by the U.S. government, the United Nations, and many respected human rights organizations of committing gross atrocities, including rape as a tool of war, against ethnic Tigrayans and others opposing the
Ethiopian government. We are not surprised that a pro-Ethiopian government member would make such intolerable statements against ethnic Tigrayans and anyone that opposes their unitary vision for Ethiopia. What we find unsettling is that these hateful comments and incitement of violence were made during a meeting with Representative Karen Bass, and the representative seemingly made no attempt to end the meeting or make it clear to Mr. Kebede that such statements were abominable and unacceptable.

Representative Karen Bass’ failure to halt or interrupt Mr. Kebede’s speech of intolerance, her officer refusal to meet with ethnic Tigrayan and other Ethiopian diaspora groups, and her continued unwillingness to join President Biden, Secretary Blinken, Ambassador Powers, Ambassador Tai, and the United States Senate in influentially denouncing the atrocities of the Ethiopian government and their allies against ethnic Tigrayans and other oppositions parties, all suggest to the public and the international community that Representative Karen Bass is more concerned about winning pro-Ethiopian government votes in her congressional district than being an advocate for human rights and justice – or, perhaps, the representative is indifferent.

We call upon Representative Karen Bass to 1) retract and repudiate the hateful statements of Mr. Kebede 2) issue a public statement on the humanitarian crisis in Tigray, and publicly call for unfettered humanitarian access to the besieged Tigray 3) advocate for a halt to hostilities in all impacted regions ofEthiopia and demand foreign armed forces engaged in combat to return to their respective bases and countries 4) visit political prisoners in Kaliti Prison and Axum where deadly massacres took place 5) conduct discussions with senior members of the US Embassy regarding their negligence in protecting American citizens in Ethiopia 6) virtually meet with coalition groups of Tigrayan, Oromos, Somalis, Kemant, Benishangul, Gebella, Agew, Sidama and others in the representative’s congressional constituency.

Finally, we urge Representative Karen Bass to call on the Ethiopian Government to announce its willingness and plans for an all-inclusive political negotiation, remove criminalizing tags from all opposing entities, and the delegates visiting Ethiopia to join President Biden in leading with diplomacy and human rights. The Ethiopian government's violence against ethnic Tigrayans, Oromos, Kemant, Benishangul, Gebella, Somali, Sidama, Agew, and other oppressed ethnic groups must end.