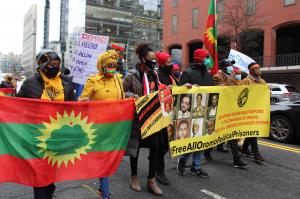 WASHINGTON, D.C., UNITED STATES , September 17, 2021 /EINPresswire.com/ — The Oromo Legacy Leadership and Advocacy Association (OLLAA) applauds President Biden's bold and necessary statement to declare a national emergency to deal with the threat in Ethiopia posed by a Prime Minister who refused repeated calls to cease hostilities. Additionally, we welcome the Senate Foreign Relations Committee's recent statement and the role members played in passing S.Res 97 that paves the way for international investigations and further action.

The atrocities in the Tigray region are part of an overarching pattern of human rights abuses committed by the Ethiopian Prime Minister Abiy's government, Amhara Regional forces, and the Eritrean military. These atrocities began in Oromia, where hundreds were publicly executed, and thousands remained in makeshift-COVID-infested prison camps.

According to a report by an Australian human rights NGO, the Oromia Support Group (OSG), at least 3,293 civilians have been killed by Ethiopian security forces since October 2018. For instance, over 1000 civilians died in extrajudicial killings in the Western Oromia region alone. A 2020 report by Amnesty International documents dozens of horrific extrajudicial killings, including a father of three who was murdered by Ethiopian Defense Forces (EDF) at a town-wide meeting because his mobile phone rang in the middle of proceedings. In another case, the Oromia Police Special Forces targeted and
killed a 10th-grade student while he drank coffee at a local cafe.

Five months ago, over 300,000 Oromos were displaced in the Oromo Special Zone. On August 27-31 OCHA-led multi-agency team visited for assessment. In W. Arsi, over a million people are in desperate need of food. In Borana, 1,500 new refugees arrived in Kenya, including already over 10,000 who were in the Kakuma refugee camp. In Sudan, S. Sudan, Somalia, Yemen, and other countries, thousands more are scattered in East Africa. These numbers are in addition to 6.7 million people in desperate need of food in Oromia alone, where over two million are still classified as IDPs.

More recently, in 2021, amidst the Covid-19 pandemic, the Ethiopian government held a sham election while also using genocidal and "dehumanizing rhetoric" language to describe the people of Tigray. Abiyhas mobilized thousands of civilians to fight by calling on all supporters to defend the nation against "the enemy." These supposed enemies are, in fact, fellow Ethiopians who are undergoing an ethnically driven genocide perpetrated by the Ethiopian government.