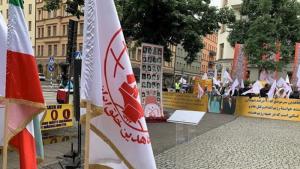 (PMOI / MEK Iran) and (NCRI): While the court proceeded, a large group of Iranians resumed their protest rally in front of the court, calling for the prosecution of senior regime officials, including Raisi and supreme leader Ali Khamenei. 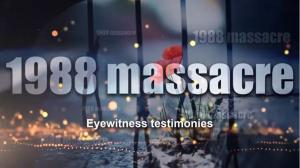 (PMOI / MEK Iran) and (NCRI): The 1988 massacre did not just happen. It was rooted in a fundamental conflict between the people of Iran, demanding freedom, democracy, and economic and social development after the overthrow of the Shah. 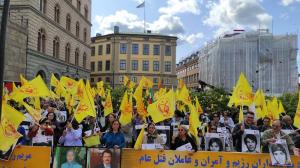 (PMOI / MEK Iran) and (NCRI): Thousands of Iranians gathered in Stockholm, Sweden, calling for a firm policy towards the Iranian regime and to hold the regime to account for the 1988 massacre of the political prisoners in Iran. 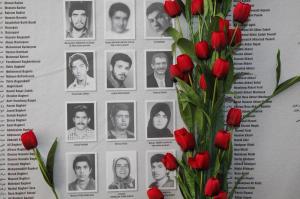 (PMOI / MEK Iran) and (NCRI): In the summer of 1988, “death commissions” throughout Iran systematically interrogated, condemned, and executed 30,000 political prisoners as part of an effort to stamp out organized opposition to the fledgling theocratic dictatorship. 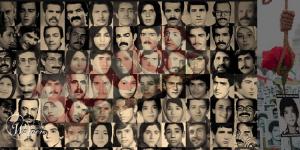 (PMOI / MEK Iran) and (NCRI): As Amnesty International’s Secretary General said, “That Ebrahim Raisi has risen to the presidency instead of being investigated for the crimes against humanity of murder, enforced disappearance, and torture is a grim reminder that impunity 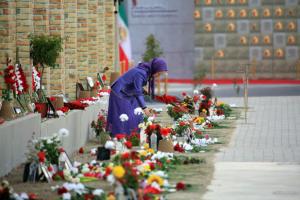 (PMOI / MEK Iran) and (NCRI): Maryam Rajavi at the World Summit for a Free Iran. We say to the world community, especially to Western governments, that Mullah Raisi is a criminal guilty of genocide and crimes against humanity in 1988. 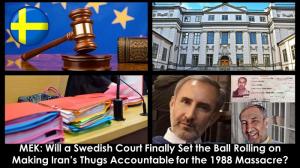 (PMOI / MEK Iran) and (NCRI): Publication of indictment and documents in the Case of Hamid Noury, Iranian Regime Henchman, by Swedish Prosecutor Authority.

(PMOI / MEK Iran) & (NCRI): “Massacre of Political Prisoners” that was published by the PMOI 22 years ago, which includes a list of a considerable number of agents & perpetrators of the massacre including Hamid Noury, in addition to the memoirs of a number of MEK member

“1988 massacre,” the swift and brutal execution of more than 30,000 political prisoners, mostly MEK members and supporters, in the summer of 1988.

The 1988 massacre has been described as a war crime and crime against humanity. Legal experts also recognize it as a “genocide” and should be addressed by international tribunals.”
— NCRI

PARIS, FRANCE, September 18, 2021 /EINPresswire.com/ — A Swedish court convened the trial of Hamid Noury, an Iranian regime official who has played an active role in torturing Iranian political prisoners in the 1980s. As one of the authorities of Gohardasht Prison (Karaj), Noury is now standing trial in a court where many of his victims are giving harrowing testimonies of how he and other regime officials brutally tortured prisoners.

Noury was arrested in 2019 after arriving in Stockholm on a commercial flight from Iran. Among his crimes is taking part in what has become known as the “1988 massacre,” the swift and brutal execution of more than 30,000 political prisoners, mostly MEK members and supporters, in the summer of 1988.

During the fifteenth session, Ramezan Fathi, a former political prisoner and a supporter of the People’s Mojahedin Organization of Iran (PMOI/MEK), testified before the court about the brutal conditions in Iran’s prisons and Noury’s crimes.

In his testimony, Fathi, who was arrested in 1981 and imprisoned in Gohardasht prison, confirmed that Noury was directly involved in beating and torturing political prisoners. According to Fathi, Noury took prisoners to the “gas chamber,” a small cell that had no windows and openings.

Prison guards covered the slit under the door with blankets and kept the prisoners in the cell for hours until they passed out from lack of oxygen. “The prisoners have kept in the gas chamber to the point that sweat dripped from their toes and was asphyxiated,” Fathi said. “When they were taken out of the gas chamber, the prison guards, who were members of the Revolutionary Guards (IRGC) and took orders from Hamid Noury, stood in two rows and brutally beat the prisoners as they passed between them.”

Fathi said that Noury and other prison authorities constantly threatened the prisoners and said that they would one day explode grenades in their cells.

The former political prisoner said that in the summer of 1988, as the mass executions started, he personally saw prison guards carrying wheelbarrows loaded with hanging ropes into the execution halls and coming back with the same wheelbarrows filled with the slippers of the executed prisoners. Authorities used refrigerator trucks to transfer the bodies of the executed prisoners out of Gohardasht Prison, Fathi said.

Fathi also said in court that the preparations for the 1988 massacre began in the winter of 1987 when prison authorities began classifying the prisoners based on their habits and their level of resistance against the persecution by the prison guards.

Fathi also witnessed prison guards bring a MEK member named Naser Mansouri out of the prison’s hospital on a stretcher and take him to the “death committee,” led by Hossein Ali Nayeri, where he was questioned for one minute and taken to the execution hall in that same stretcher.

The death committee, which also included regime president Ebrahim Raisi, was a group of regime officials who summoned political prisoners and tried them in kangaroo courts that lasted no longer than a few minutes. Any prisoner who did not disavow their support for the MEK was immediately taken for execution.

Fathi also testified that one of the prisoners was taken for execution after he suffered a seizure in the “death hall,” the place the inmates as they waited for their turn to be executed. In his testimony, Fathi stressed that the prisoners bravely defended their identity as supporters and members of the MEK, and this is the only reason that the regime executed them.

During the seventeenth session, Akbar Bandali, a former political prisoner and a supporter of the People’s Mojahedin Organization of Iran (PMOI/MEK), testified before the court.

Bandali was born in Tehran and has an MSc in geology from Tabriz University. He was arrested in the summer of 1981 on Charges of supporting the MEK while he was on military service.

In his remarks, Bandali said that in 1987, a year before the mass executions, one of the prisoners asked Noury why they were being transferred to the ward known as “Jahad,” to which Noury responded, “We want to execute the prisoners who are up there.” Bandali emphasized that the 1988 massacre was in the plans since 1987.

During the summer of 1988, the Iranian regime carried out the swift and brutal execution of more than 30,000 political prisoners, mostly MEK members and supporters. The purge was directly ordered by Ruhollah Khomeini in an edict that explicitly stated that anyone supporting the MEK is an enemy of God and deserves to be executed.

Bandali, who spent 13 years in the regime’s prisons, testified before the court that when the executions started in July 1988, MEK prisoners were taken to the “Death Commission,” a group of judges who summoned political prisoners and tried them in kangaroo courts that lasted no longer than a few minutes. Bandali said the prisoners told the death commission that they supported the MEK were executed. One of the members of the death commission in Tehran and Karaj was Ebrahim Raisi, the regime’s current president.

During his prison term, Bandali was brutally tortured and sentenced to 15 years in prison. Bandali also witnessed violent tortures of other inmates during his time in Evin prison. Bandali said that as the 1988 massacre started, prison authorities constantly carried the bodies of executed prisoners, wrapped in sheets, into trucks and transferred them out of the prison.

“There was an IRGC guard on top of the truck and we saw the corpses being loaded into the back of the truck,” Bandali said. “I felt sick. I was going to explode from sadness.”

Bandali also said that after the first and second waves of executions, the prison guards told the prisoners to report on cellmates who supported the MEK.

Bandali quoted another prisoner and said, “Noury told the prisoners who weren’t executed that they must beg for pardon from Khomeini ‘because he has ordered us to execute all of you.’” Noury had also said that if they wanted to carry out Khomeini’s order, they would have to “executed half of Iran’s population.”

In addition to Gohardasht, Bandali spent time in Evin, Jamshidiyeh, and Ghezel Hesar prison, where he was tortured and witnessed the execution of many prisoners. Bandali testified that Noury was the leader of guards who beat prisoners. On one occasion, when Noury had realized that Bandali’s knee was hurt, he tortured him on the same spot and beat him violently.

Bandali also said that to punish prisoners, Noury took them to the “gas chamber,” a small cell that had no windows and openings. Prison guards covered the slit under the door with blankets and kept the prisoners in the cell for hours until they passed out from lack of oxygen. When the prisoners entered a comma-like state, the guards took them out of the gas chamber and, led by Noury, beat them with batons and electric cables.

While the court proceeded, a large group of Iranians resumed their protest rally in front of the court, calling for the prosecution of senior regime officials, including Raisi and supreme leader Ali Khamenei. Many of the protesters were family members of the thousands of dissidents murdered or executed by the regime.

The 1988 massacre has been described as a war crime and crime against humanity. Legal experts also recognize it as a “genocide” and should be addressed by international tribunals.

1988 Massacre of political prisoners in Iran