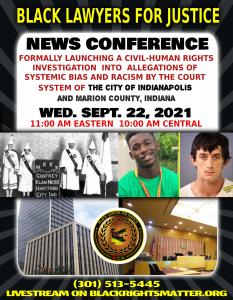 Community listening sessions and other methods of interaction, data collection and feedback will be used in the course of this investigation.

The Indiana Chief Judge opened the door to a very important subject regarding race and justice in the state of Indiana.”
— Malik Zulu Shabazz, Esq

INDIANAPOLIS, IN, USA, September 20, 2021 /EINPresswire.com/ — EVENT: Black Lawyers for Justice news conference formally launches a Civil-Human Rights investigation into allegations of systemic bias and racism by the court system of the city of Indianapolis.

On Wednesday September 22, 2021 a special ZOOM news conference will be held by Black Lawyers for Justice, which will formally launch a Civil-Human Rights investigation into allegations of bias and systemic racism in the Indianapolis Justice System. This investigation has been expected since the announcement was made by lead counsel Malik Z. Shabazz, Esq. on July 16, 2021 at the courthouse in Indianapolis, in connection with the murder case of Dorian Murrell by Tyler Newby last year. Outrage and objections were issued on that day about Newby being given a bond and released from home monitoring by prosecutors.

Last year in the midst of outrage in Indianapolis over the issue of police brutality, on June 5, 2020 the Chief Justice of the Supreme Court of Indiana said the state's court system "must acknowledge and confront" its own failings regarding racial inequities and bias. Chief Justice Loretta Rush, in her “Statement on Race and Equity,” said she wants it known that Indiana "can and must do better" regarding equal treatment of all who come before the court. Cite: https://wpta21.com/2020/06/05/state-supreme-court-chief-justice-courts-can-be-complicit-in-perpetuating-bias/

On behalf of Black Lawyers for Justice, Attorney Malik Z. Shabazz says “The Indiana Chief Judge opened the door to a very important subject regarding race and justice in the state of Indiana. Over the years and presently, Indianapolis may have engaged in a pattern or practice of conduct that violates the 5th Amendment, 6th Amendment and 14th Amendment of the Constitution. Indianapolis’ harmful court and police practices are due, at least in part, to intentional discrimination, as demonstrated by direct evidence of racial bias and stereotyping about African Americans by certain Indianapolis police and municipal court officials.”

The Black Lawyers for Justice investigation will utilize the Indiana Freedom of Information Act, as well as direct written questionnaires to prosecutors and court officials. Interviews with local residents, persons affected by the justice system as well as interviews with public officials will be conducted. Community listening sessions and other methods of interaction, data collection and feedback will be used in the course of this investigation.

The initial set of document requests to the City of Indianapolis will be released before this news conference. #Justice4DorianMurrell