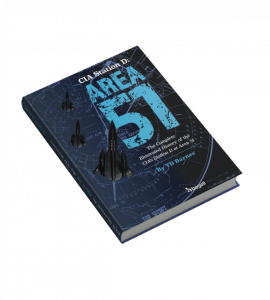 For the first time, the book presents Area 51 under CIA involvement & opens light on CIA operations under U.S. Government Code “No Need To Know”

DANBURY, CT, U.S., October 11, 2021 /EINPresswire.com/ — “CIA Station D – Area 51: The Complete Illustrated History of the CIA's Station D at Area 51” is an insider's story; a veteran of Area 51 outlines chronologically what the CIA did for 20 years that we didn’t know about. Those answers come in large due to the CIA's recent declassification of secret documents. These documents have identified the CIA facility as Station D – Area 51, the most secretive and a power projection venue for testing high-flying spy planes, developing stealth technology, conducting aerial reconnaissance, and exploiting acquired US adversaries' military assets. Purchase on Amazon and Kindle.

The book addresses challenges, sacrifices, and accomplishments of those serving at Area 51. It addresses the “who, when, where, what, and why” that made the CIA a world leader in science and technology, revealing why people never knew about Area 51's belonging to the CIA. It includes a considerable amount of new material that no one, particularly in the United States, knows; some that even the Agency today had no idea went on.

It details how the CIA set Area 51 up as a global operation: not only the creation and test-flying U-2 planes for placement in Europe, Turkey, and Japan—telling how the CIA ran Area 51 as a worldwide operation. Since the text is about CIA aircraft later adopted by the U.S. military, the book recognizes the efforts of the United States Air Force, Navy, Marine Corps, Coast Guard, and the National Guard.

The historical background starts with World War II and continues after and the CIA's formation. It covers the Cold War outlining world political events, systems dualities, and correlations in detail with outcomes in challenges of new policies that shaped countries and presidencies and what became the underlying reasoning to set up the most secret project in world history, "Area 51".

Historical evidence from the CIA's formation by President Truman continued until the investigation started looking into a secret Station the CIA had inside the United States. Then, under the watch of President Jimmy Carter and DCI Stansfield Turner, in 1979, the CIA's Station D had to relinquish control of Area 51 to the US Air Force. Thus, in 1979, within the year, the world first became aware of Area 51, which the CIA secretly formed and controlled for over 20 years.

Area 51 was more secretive and classified than the "Manhattan" Project, and even within the CIA, no one knew there was a Station D Area-51. Because of the governmental "need to know" code, even people who worked in Area 51 did not know everything going on, or their working for the CIA.

Many lost their lives in crashes after leaving Area 51. This book tells the story of these brave pilots and many other persons who helped launch the Central Intelligence Agency into the world of overhead reconnaissance. While this book is about the CIA era at Area 51, it includes the equally rich legacy of the U-2s flown by the CIA operationally and elsewhere. The book comprises affiliated CIA organizations like the Agency's U-2 Black Cats in Taiwan, the Chinese Black Bats who trained at Area 51, and the USAF's Red Eagles and Red Hats carrying on the CIA's MiG aircraft exploitation programs.

The sacrifice these pilots and U-2 project personnel made for their country helped the United States win the Cold War. Along with thousands of Americans working at Area 51, their patriotism, ingenuity, and willingness to take on project critics who believed it impossible at the time–the creation of the U-2—allowed the US to penetrate the Iron Curtain and gain an unparalleled advantage over the Soviets in intelligence gathering.

It covers developments beyond U-2, explains the need to replace the U-2 plane, and details the proposed successor – the highly secret A-12 OXCART, which met the nation's demand for a high-flying reconnaissance aircraft whose speed avoided Soviet air defenses.

Not only did the A-12 prove its worth during its short operational life, but the OXCART project produced the second-longest-lasting aerial reconnaissance platform in US intelligence history: the SR-71 Blackbird, the follow-up version of the OXCART. In addition, the A-12 OXCART's unique design and characteristics became the foundation for three other versions of a supersonic aircraft that Lockheed built for the CIA and the Air Force: the YF-12A, the M-21, and of course, the SR-71.

In the end, the OXCART's innovations produced the two fastest, highest-flying piloted jet aircraft in history (the A-12 and SR-71). In addition, the CIA at Area 51 pioneered technology later adapted for subsequent aerial platforms, and through its Soviet MiG exploitation programs, reversed the 9:1 kill ratio against the US in the Vietnam War, the genesis of the Navy's Top Gun Weapons School and the US Air Forces' annual Red Flag Training Exercises. The book also tells how the U-2 and A-12 projects were the geneses of the CIA's Science and Technology Directorate as its fifth discipline for intelligence gathering.

Lastly, this book recognizes individuals and families affiliated with Area 51 during the CIA era 1955–1979. CIA Station D – Area 51 is about the Cold War, the Arms, the Nuclear, and the Space Races, which led to the Agency's secret activities in Nevada and world-wide.

Author Thornton D. “TD” Barnes first became involved with the US Intelligence agencies while in the Army during the CIA’s Project Palladium. He served with the CIA on special projects at Area 51, and his on-and-off relationship with the Agency continues to this day. Barnes currently serves as President of Roadrunners Internationale, an association of Area 51 CIA, Air Force, and contractor veterans, and is the Executive Director of the Nevada Aerospace Hall of Fame.

Begell House Inc. is a leading publisher of scientific journals, books, and online databases in a wide range of engineering and biomedical science disciplines. The Begell Digital Portal online platform covers over 35 years of professional peer-reviewed research and information. Today, it remains one of the few independent scholarly publishers in the world.