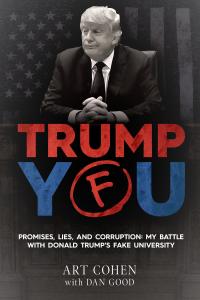 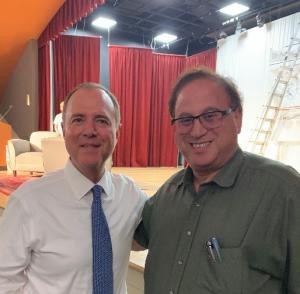 The author with Congressman Adam Schiff.

The gripping memoir of Trump University's legal saga through the eyes of Art Cohen, who personally sued Trump and had a private view of the 45th president.

The story of Trump University is a gripping tale of ego and deceit, and it exposes the con man who became president. And no one can tell it better than Cohen.”
— David Corn, co-author, Russian Roulette

NEW YORK, NEW YORK, UNITED STATES, October 19, 2021 /EINPresswire.com/ — Trump University was the most expensive legal defeat of Donald Trump’s career-but even though he settled for $25 million, he still got off too easy. Years before his White House run, the reality TV star and real estate scion launched a for-profit education initiative-Trump University, or TrumpU for short—in which he promised to share his real estate secrets at seminars held in hotel ballrooms. As it turned out, Trump University wasn’t an actual university and didn’t feature Trump’s secrets.

The scam suckered thousands of unsuspecting victims out of their hard-earned money. And it fueled a tense legal battle that should have derailed Trump’s presidential run in 2016. TRUMP YOU: Promises, Lies, And Corruption: My Battle With Donald Trump's Fake University (Gatekeeper Press; October 19, 2021) recounts the inside story of the TrumpU legal saga through the eyes of Art Cohen, a student victim who personally sued Donald Trump in federal court in 2013 and had a private view of Trump during the height of his presidential campaign. While TrumpU seems quaint today, it foreshadowed the devastation, bloodshed, and corruption that defined Trump’s presidency.

"Art Cohen had the guts to take on Donald Trump, and he helped reveal the fraud at the very core of Trump’s self-promotion. The story of Trump University is a gripping tale of ego and deceit, and it exposes the con man who became president. And no one can tell it better than Cohen," says David Corn, co-author, Russian Roulette: The Inside Story of Putin’s War on America and the Election of Donald Trump.

TRUMP YOU reveals never-before-shared details of the Trump University legal saga that come from private conversations, notes, and recollections. The authors have also obtained fresh interviews with key figures associated with the TrumpU legal battle.

"One court decision—in May 2016—changed the course of American democracy. Trump You quickly takes you to that decision, its immediate consequences, and lets you, the reader, make conclusions based on transpired facts—while still leaving some open unanswered questions—left for future investigation." Trump You also reveals how indicted Trump Organization CFO Allen Weisselberg has already 'flipped'—his admission under oath in his 2015 deposition that all decisions related to investment matters are directed by Trump—foreshadows Trump's indictment,” says Cohen.

ART COHEN, a Silicon Valley, California-area businessman and entrepreneur, enrolled in Trump University in 2009 with the hopes of becoming a real estate developer, but after spending tens of thousands of dollars and getting nothing of value in return, he joined a lawsuit against Trump University in 2011 and became engaged as a lead plaintiff in 2013, a role he continued through the $25 million settlement in November 2016 and subsequent payouts for Trump University’s thousands of victims. Cohen was an alternate-delegate for Hillary Clinton at the 2016 Democratic National Convention and served as president of the Silicon Valley Democratic Club. He is currently a commissioner for the Santa Clara County Moscow Sister City Commission and is a Rotary International member. https://www.artcohenauthor.com/

DAN GOOD is an investigative journalist and book writer who’s worked for the New York Post, New York Daily News, ABC News, and NBC News. He lives outside of New York City with his family