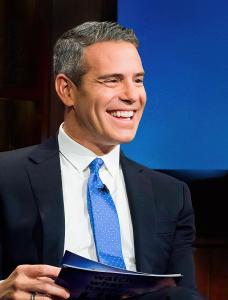 TV host and bestselling author Andy Cohen talks to actress/author Amber Tamblyn about the women who inspire him year round. 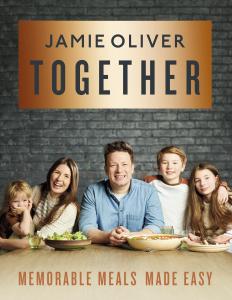 Chef, author and TV cooking host Jamie Oliver tells actress/author Kate Hudson some of the recipes from his new book “Together,” that helps to take the stress out of cooking and entertaining. 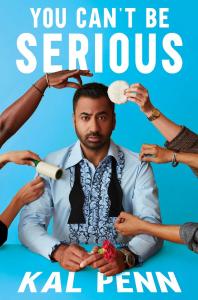 In an in-person and virtual talk, actor and former Obama advisor Kal Penn shares amazing stories from his unpredictable life in “You Can’t Be Serious.”

The month kicks off with Jamie Oliver on Monday, November 1, 2021, 8pm. The bestselling author, restaurateur, television personality and food activist appears in a live conversation with actress Kate Hudson where they will discuss his newest cookbook "Together: Memorable Meals Made Easy." The aim of "Together" is to minimize the time spent in the kitchen and to maximize the opportunity for the home chef to mingle with guests. Oliver has gathered 130 recipes with meal plans in every chapter that take the stress out of cooking and show how to focus on comfort, celebration, creating new memories and above all, sharing fantastic food. The conversation will be available virtually on Wednesday, November 3, 2021, 6pmPT/9pmET.

The extraordinary life and legacy of legendary journalist Cokie Roberts—a trailblazer for women— is remembered by her friends and family in this virtual conversation on Tuesday, November 2, 6pmPT/9pmET. Steven V. Roberts, Cokie's husband of 53 years, is author of "Cokie: A Life Well Lived." He is joined in this panel discussion by Cokie's close friends and colleagues Nina Totenberg and Martha Raddatz , with Judy Woodruff as moderator. Cokie, who skyrocketed through glass ceilings at NPR and ABC, was a fixture on national television and radio for more than 40 years and wrote five bestselling books focusing on the role of women in American history. This loving tribute was penned not only to reflect on Cokie's many accomplishments, but to share how she lived each day with a devotion to help others, and how her private life was as significant and inspirational as her public one.

Actor and former White House staff member Kal Penn recounts his idiosyncratic life in a live conversation about his new book "You Can't Be Serious," a series of funny, consequential, awkward, and ridiculous stories. He appears onstage on Thursday, November 4 at 8pm, and the virtual session will be available on Wednesday, November 9 at 6pmPT/9pmET. As a grandson of Gandhian freedom fighters and the son of immigrant parents, Penn rejected his family's advice to pursue "something practical," and embarked on a surprising journey that has included acting, writing, working as a farmhand, teaching Ivy League University courses, smoking fake weed with a fake POTUS, before serving the country and advising a real one. As an Associate Director of the White House Office of Public Engagement, Penn served as President Obama's Liaison to Young Americans, Asian Americans and Pacific Islanders, and the Arts communities in America. Above all, "You Can't Be Serious" shows that everyone can have more than one life story. And oh yes, he accidentally took his entire White House department to a strip club.

Andy Cohen, the New York Times bestselling author and host of "Watch What Happens Live" offers an inspiring collection of daily quotes from the larger-than-life women who defined his life, offering inspiration and affirmation. He talks to bestselling author, actress and activist Amber Tamblyn on November 18, 6pmPT/9pmET in a virtual conversation. In his new book, "Glitter Every Day: 365 Quotes from Women I Love," Cohen not only gathers 365 sayings and quotes from the icons, thought leaders, Real Housewives and legendary celebs that fuel his fun, but he also writes about the people and experiences that have made him live one of the most joyous lives that any little boy growing up in St. Louis could dream of. Tamblyn, a bestselling author, actress and activist, is the author of six books including the critically acclaimed, "Era of Ignition: Coming of Age in a Time of Rage and Revolution."

Critically acclaimed and bestselling author Tana French discusses her newest novel "The Searcher," her first to feature an American protagonist. In a virtual conversation on Monday, November 8, 6pmPT/9pmET, actress/author Jamie Lee Curtis will talk with French about this Western-inspired mystery, rich with French's signature powerhouse characterizations and atmospherics. The New York Times proclaims, "She is in a class by herself." As the author of seven previous books, including "In the Woods," "The Likeness," and "The Witch Elm," French has sold over three million copies and won numerous awards, including The LA Times Award for Best Mystery/Thriller and the Edgar Award. Award-winning actress Jamie Lee Curtis is also a best-selling children's book author and host of the podcasts "Letters from Camp" and "Good Friend."

Model, actress, activist, entrepreneur and writer Emily Ratajkowski talks about her first book "My Body" to award-winning journalist and bestselling author Elaine Welteroth in an onstage conversation on Thursday, November 11, 8pmPT. "My Body" is a profoundly personal exploration of feminism, sexuality and power of men's treatment of women, and women's rationalizations for accepting that treatment. The essays chronicle Ratajkowski's life while investigating the culture's fetishization of girls and female beauty, its obsession with and contempt for women's sexuality, the perverse dynamics of the fashion and film industries, and the grey area between consent and abuse. Welteroth, a judge on Bravo's "Project Runway" is known for her work at the helm of Teen Vogue, where in 2016, she was appointed the youngest ever Editor-in-Chief at a Conde Nast publication. The discussion will be presented virtually on Sunday, November 14, 6pmPT/9pmET.

The Aratani Theatre is located 244 San Pedro Street, Los Angeles, CA 90012. This is a limited capacity event and masks are required for entry into the venue. For more information and to purchase tickets, please visit Live Talks Los Angeles.