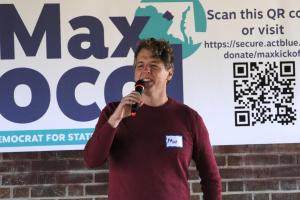 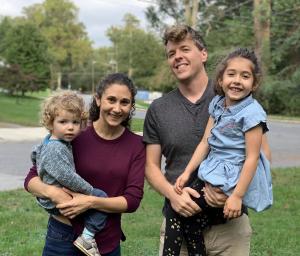 Silver Spring, Kensington, Wheaton, Chevy Chase, and other Montgomery County residents came out to show their support at this event held at Wheaton Forest Park.

This isn’t a political event, it’s an action. This isn’t a fundraiser, it’s a disruption of the status quo. I believe in this beloved community and there is too much at stake for us not to fight.”
— Max Socol

Campaign Chair, Joanna Silver, a social justice leader; along with Brandy Brooks, a candidate for Montgomery County Council At-Large and a housing & environmental justice organizer; and Amyra Hasan, a young public education advocate; all District 18 residents, introduced Max to the over 100 voters and their families in attendance. Along with the Max for Maryland playlist, attendees enjoyed Halloween games at this fun and festive kickoff.

Surveys and polls show that the most important issues to the citizens of Montgomery County are rent stabilization & workforce housing, climate change, and public safety reform. Max For Maryland believes District 18 should be leading the state and Maryland should be leading the nation on these issues and more.

Max spoke clearly about these issues and others, including the importance of a great public education for every child. He said “This isn’t a political event, it’s an action. This isn’t a fundraiser, it’s a disruption of the status quo. And I’m not just asking for you to vote, I’m asking you to get organized with me. I believe in this beloved community and there is too much at stake for us not to fight.”

Started less than two months ago, Ethan Miller, Campaign Treasurer for Neighbors for Max Socol, reports that nearly $40,000 has already been raised. And, last week Max traveled to the state capitol in Annapolis to officially file as a candidate.

Registered voters can cast their ballot in the Democratic primary on Tuesday, June 28, 2022 at their neighborhood polling place. Voting by mail and early voting will both also be available per Maryland state law. If you aren’t already registered to vote in Maryland, go to https://elections.maryland.gov/voter_registration/ for more information.