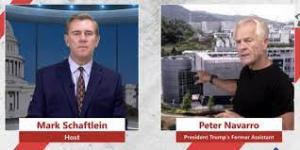 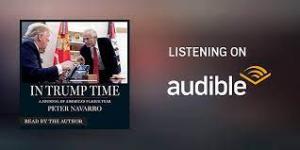 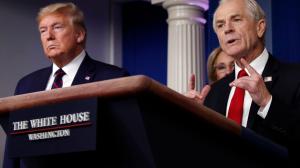 This first of its kind audiobook allows the listener to truly feel like they are experiencing history. The addition of key voices makes this account of my time in the White House a must-hear for all.”
— Peter Navarro

While a guest during the 1-year anniversary Episode of The Schaftlein Report, Peter Navarro discussed the release of his new audiobook, “In Trump Time”. This innovative audio presentation and dramatic production features the voices of numerous people appearing in the book, from Corey Lewandowski, Steve Bannon, and Dr. Steven Hatfill to National Security Advisor Robert O'Brien, and President Trump himself.

Read by author, Peter Navarro “In Trump Time” is the definitive insider's account of the Trump White House. The interview can be heard at
https://www.iheart.com/podcast/263-the-schaftlein-report-87879188/episode/schaftlein-report-an-inside-account-of-the-trump-white-house-as-told-by-peter-navarro-88714990?cmp=ios_share&sc=ios_social_share&pr=false

"This first of its kind audiobook allows the listener to truly feel like they are experiencing history," said Peter Navarro. "The unique addition of key voices makes this searing account of my time in the White House a must-hear for all Americans."

Mark Schaftlein host commented: “It was truly an honor to have Perter Navarro on our special 1-year anniversary episode. His insight and access to what was really going on at the top of the Trump administration is second to one. I strongly encourage anyone regardless of their political opinions to experience this truly groundbreaking and insightful audiobook.”

Peter Navarro is one of only three White House officials by the President's side from the 2016 campaign to the end of the President's first term. Always moving In Trump Time, as was his signature, Dr. Navarro's new book seeks to get to the bottom of what happened in a Wuhan bioweapons lab and hold Communist China accountable for its deadly role in the pandemic. This compelling audio presentation races along delivering new revelations in every chapter.

Peter Navarro holds a Ph.D. in economics from Harvard University and was a professor emeritus of economics and public policy at the University of California-Irvine for more than 20 years. He served as Assistant to the President and Director of the Office of Trade and Manufacturing Policy at the White House during the Trump Administration. He is the author of numerous books, including his China Trilogy: The Coming China Wars (2006), Death By China (2011), and Crouching Tiger (2015).

Dr. Navarro’s interview can be heard on all major podcast platforms.
In Trump Time is available now on Amazon: https://bit.ly/InTrumpTimeAudio

For more information about The Schaftlein Report or to become a guest visit the website at SchaftleinReport.com or contact Liz Martin at Liz@invictaconsulting.agency

The Schaftlein Report is enjoying a rapidly growing national audience reached through the company’s websites, social media accounts, podcasts, and an in-house email list. The podcast’s audio format is intended to provide commuters in particular the ability to enjoy the show on their podcast platform of choice. Mr. Schaftlein has been a conservative political commentator on the international stage and the host of his political talk show, which seeks to address factual political news without the left-wing bias of mainstream media.

For more information about The Schaftlein Report visit the website at SchaftleinReport.com or contact Liz Martin at Liz@invictaconsulting.agency
About CBMJ: (CBMJ) Conservative Broadcast Media and Journalism is a Digital Marketing Company based in Metro-Atlanta that specializes in reaching a conservative/libertarian/religious audience. Among other assets, CBMJ operates numerous social media accounts across several platforms with over 2 million followers, owns an active database of over 12 million opt-in email subscribers, and publishes a network of 47 monetized political/news websites generating 10 million page views per month. Some of the marquis sites include www.flagandcross.com , www.patriotdepot.com and www.militarygradecoffee.com . The Company also maintains one of the largest collections of historical documents on the web at http://constitution.com/ .

Forward-Looking Statements: This release contains forward-looking statements within the meaning of Section 27A of the Securities Act of 1933, as amended and Section 21E of the Securities Exchange Act of 1934, as amended. All forward-looking statements are inherently uncertain, based on current expectations and assumptions concerning future events or future performance of the company. Readers are cautioned not to place undue reliance on these forward-looking statements, which are only predictions and speak only as of the date hereof. In evaluating such statements, prospective investors should review carefully various risks and uncertainties identified in this release and matters disclosed at www.otcmarkets.com . These risks and uncertainties could cause the company's actual results to differ materially.
Mark Schaftlein
877-704-6773

Peter Navarro on The Schaftlein Report