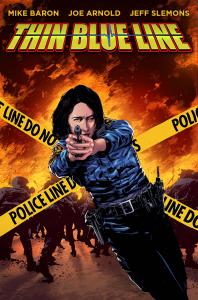 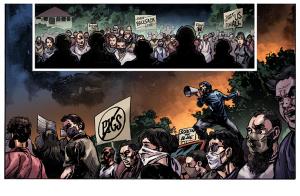 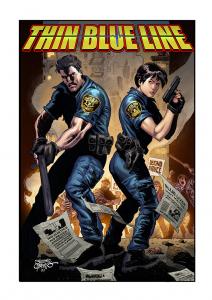 Thin Blue Line doesn’t gloss over issues cops deal with, so in many ways it’s as gritty as my run on The Punisher, but way more thrilling and never 'woke'.”
— Eisner-winning writer, Mike Baron

DENVER, COLORADO, UNITED STATES, November 9, 2021 /EINPresswire.com/ — While mainstream comicbook publishers exploit their globally recognized superheroes to confront social issues like climate change and illegal immigration rather than combating traditional threats from evildoers, comics veteran Mike Baron is bucking the trend by returning to what he believes made comics great from the start; thrilling action and human drama. But instead of super powered aliens with “woke” politics, the Eisner-winning writer made cops the protagonists in his newest graphic novel “Thin Blue Line”.

“My only job is to entertain the reader,” Baron says. “they don’t want to be lectured to.”

Baron first made a name for himself at Marvel Comics back when the publisher was launching an ongoing title for their first true anti-hero, The Punisher. The comic became so popular under Mike’s direction, he remained on the title for five years, a feat unheard of today. Baron went on to write several other notable comics including DC's The Flash and Star Wars for Dark Horse, and even found success with a few of his own creations – Nexus, The Badger, and Florida Man, but Thin Blue Line was a different proposition.

“None of my previous publishers would touch it,” Mike explains. “Given the current climate, I can’t say I blame them. But Thin Blue Line doesn’t gloss over the issues that cops deal with, so in many ways it’s as gritty as my run on The Punisher, but way more thrilling.”

Thin Blue Line’s central character is a single mom named Valeria Baca, a patrol officer who serves her community while raising a daughter. That proves difficult when she’s confronted with an ethics-challenged officer amidst unrest and violent protests taking over the streets in response to a police shooting.
“I rip my stories straight from the headlines,” Mike continues. “Last summer’s riots and demonstrations made me think about law enforcement in a whole new way, particularly cops who genuinely care.”

Once he conceived the story, Baron approached artist Joseph Arnold, a longtime friend, whose career as a full-time patrol officer added an additional level of credibility to the project.

“Joseph’s experiences really informed the story,” Baron adds “because he’s out there on the front lines every day dealing with many of the same difficulties. I also brought in Jeff Slemons to handle the finishing and inks. It really turned out to be a beautiful book.”

After completing the artwork, they spent several weeks trying to find a publisher willing to distribute it, but after multiple brush-offs the team finally decided to offer the book on Indiegogo, a crowdfunding website where Baron has previously found moderate success with some of his irregular publishing projects. Incredibly, the book reached its funding goal in only three days.

While he recognizes policing is a hot-button issue these days, Baron says this story isn’t necessarily “political,” although it admittedly does treat cops fairly and favorably. The creative team also demonstrated their support for law enforcement by including “back the blue” campaign stretch goals designed to direct a portion of the crowdfunded proceeds to multiple law enforcement support groups.

See pages from the comic and learn more about the project at thinbluelinecomics.com