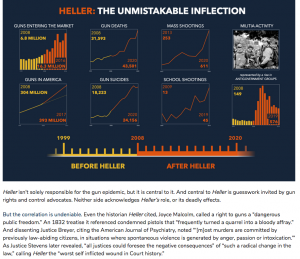 The American Enlightenment Project is a 501(c)(3) nonprofit formed to end the gun epidemic by challenging conventional wisdom and the dangerous court decisions fueling it.”
— Robert Ludwig of Ludwig & Robinson PLLC

WASHINGTON, DC, UNITED STATES, November 11, 2021 /EINPresswire.com/ — On Nov. 3, the Supreme Court heard argument in New York State Rifle & Pistol Ass’n v. Bruen, No. 20-843, the most consequential gun case in a decade, but a legal farce as participants talk around glaring errors in its Heller decision, says Robert Ludwig of Ludwig & Robinson, counsel to the American Enlightenment Project. In a timely article, “High Court Gun Rights Case Ignores Key Case Law Problem” (Law360 Nov. 5, 2021), he reveals how they are sleepwalking the country into a deepening, self-inflicted crisis.

The court is reviewing New York's good-cause statute for concealed carry, and many expect it to extend its holding in District of Columbia v. Heller, 554 U.S. 570 (2008), of a right to “bear” arms in the home to public places. In 2017, Justice Thomas noted it "extremely improbable the framers understood the Second Amendment to protect little more than carrying a gun from the bedroom to the kitchen," referring to Heller’s 5-4 holding of a right to “handgun possession” and to “carry it in the home.” But, as Mr. Ludwig writes:

• That odd 2008 holding, extended nationwide in 2010, turned America's gun problem into a “gun epidemic,” declared in a 2015 New York Times front-page editorial.
• Until Heller there was no individual right. Courts held for most of the 20th century, as one said, the amendment was "meant solely to protect the right of the states to keep and maintain armed militia."
• Odder still, Heller overturned the state right without addressing it, or any party arguing it.

More concerning, he notes, is the constitutional artifice Heller made of the Second Amendment. Using the opening clause “A well regulated Militia,” he illustrates how Heller:

• dismissed “well regulated” in one sentence, writing it “implies nothing more than … proper discipline and training.” That conjecture can also be debunked in one sentence. The Articles of Confederation provided that “every state shall always keep up a well-regulated and disciplined militia”; to equate “well regulated” and “disciplined” would reduce the first constitution that governed the founding, unmentioned in Heller, to ‘disciplined and disciplined militia’ — an imbecility.
• implied that “militia” meant citizens' militia, not military forces, ignoring the Articles’ identical use of “well regulated militia.” The term “citizen militia” is not used in any reported decision until a 1980 billy club case on which Heller relied, that conflated "citizen soldiers" and militia into flapdoodle.

As another example, he shows Heller never addressed the verb on which the amendment rests — transposing “infringed” to “abridged” though not synonyms, as is obvious from any thesaurus, but terms of art. Overlooking text, Heller can have no binding effect.

Virtually everything about Heller distorts the text and founding record, he says, which present a very different historical picture and constitutional right. That includes Heller’s other holdings:

• “Ancient right” to arms for self-defense—but the historian Heller cited conceded it was a “duty” for centuries, and any “assertion of a guaranteed right” after the 1689 English Declaration of Rights “seems empty rhetoric”
• Right to guns "typically possessed"—rests on the idea militia and personal weapons "'were one and the same,'" quoting the billy club case, which miscites a swords encyclopedia that contradicts it.
• Right of “citizens’ militia as a safeguard against tyranny” if “order broke down”—ignores bedrock. Hamilton wrote it is “an axiom of our political system … State governments will…afford complete security against invasions of the public liberty by the national authority.” Blackstone repudiated as overzealous the notion individuals had “the right of determining [when order is endangered] and of employing private force to resist” as a “doctrine productive of anarchy.”

Heller’s mistaken “typically possessed” ruling was the basis for tossing D.C.’s gun ban, and others since. Its “citizens’ militia” error emboldens insurgencies like the Jan. 6 assault on the Capitol, and armed pseudo-militias that intimidate statehouses, polling places and protests, often turning deadly.

In Bruen, gun rights and control advocates, not raising or aware of Heller’s glaring errors, are arguing over the 1328 Statute of Northampton and 700 years of Anglo-American criminal law, that “restricted the public carrying of … deadly weapons," as New York asserts. That fight, he says, is misplaced:

• Both sides overlook the 1181 Assize of Arms and 1,000-year Anglo-American militia system. Unmentioned in Heller, they were the focus of the court's unanimous 1939 decision which led to uniform recognition of the state right.
• One body of law governed civilians, the other militiamen (exempted from Northampton and later statutes), as different as civil and military law today.

What the parties and court in Bruen should be addressing, Mr. Ludwig concludes, is the underlying dangerous decision in Heller, and whether it was correctly decided, observing:

• The historian Heller cited for its right called it a “dangerous public freedom,” which “for obvious reasons very few governments have ever been prepared to grant.”
• Heller isn't solely responsible for the epidemic, but is central to it, having struck down and shackled gun regulation, unleashed deregulation and allowed guns nationwide, inflicting untold damage.
• Central to Heller were failures of the adversary system that assumed away the state right, text, first constitution, federalism, militia system, even “the people” as the state. Other blind spots include the amendment's antecedents, plain meaning, and who determined its wording and why.
• The real tragedy is Heller didn't have to happen, had academics, lawyers and courts not abandoned the longtime state right and taken greater pains to understand it.
• Another tragedy is Americans still don't see the elephant in the room, or question it. New York's Solicitor General, asked at the Bruen argument, was “quite content to treat it as rightly decided.”

It's time litigants take a different approach, Mr. Ludwig states. The court, with its institutional authority at stake, should recognize it has not addressed the full Second Amendment, and set a rehearing to decide what the Constitution actually means.”

For the Law360 article, visit http://www.ludwigrobinson.com/img/Law360.pdf