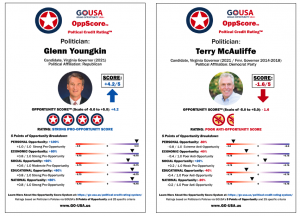 (Boston, MA) Grand Opportunity USA, or “GOUSA®”, a 501(c)4 nonprofit organization, rated Virginia gubernatorial candidates Glenn Youngkin and Terry McAuliffe via its first-of-its-kind political credit rating system, the OppScore®, this past September. At the time, McAuliffe was comfortably ahead of Younkin in the polls. Younkin easily bested McAuliffe with a strong Pro-Opportunity OppScore of +4.2 vs. McAuliffe’s poor Anti-Opportunity OppScore of (negative) -1.6 – and went on to win.

GOUSA heavily promoted its OppScore ratings for the Virginia race in its social media, videos, emails and press releases, and had sponsored the Second Amendment Institute’s Defending Freedom Action Summit in Richmond on 9/25 – 9/26; combined, its message reached millions. While GOUSA has scored many candidates to date, this was this first major political race where the OppScore has been fully tested, showing the validity, impact and effectiveness of its novel political rating system and ability to deliver results.

GOUSA, led by John Paul Moran, has a mission is to motivate, educate and mobilize citizens of all backgrounds to advance pro-American values that everyone can unite around while holding our elected officials 100% accountable to voters.

The OppScore is a non-partisan, universal political credit rating based on GOUSA’s Five Points of Opportunity, a set of popular principles supported by the vast majority of voters. In short, the scoring system stands for and with the American people on the issues that matter to them most. Movies receive Rotten Tomatoes ratings. Businesses receive Yelp ratings. Everyone receives FICO credit scores…Politicians will finally receive their ratings as well.

The OppScore ranges from negative –5.0 points (extreme Anti-Opportunity) up to +5.0 points (strong Pro-Opportunity). In GOUSA’s view, all politicians should achieve an OppScore of at least +3.0 points to be elected or remain in office. Learn more at: https://go-usa.us/endorse-the-oppscore

Youngkin and McAuliffe were each scored by GOUSA’s rating team, referencing the candidate’s positions, statements, interviews and records. Youngkin received a strong Pro-Opportunity score of: (positive) +4.2/5, indicating that he is strongly aligned with the majority of voters on the issues. In contrast, McAuliffe received a poor Anti-Opportunity score of (negative) -1.6/5, showing that he is working directly against the interests of voters – a significant reason why he lost.

With such a clear difference, the choice for Virginia voters was clear.